Saturday 1st   It was a dull calm day, there were some showers in the morning, but it was fine in the afternoon.  Willie and the young Heneys went fishing to Ti Point.  Willie brought home 3 fish.
Revd E. M. Cowie called in the morning, he was on his way to Pakiri.
I was earthing up Potatoes in the E.R. in the afternoon.  When I was coming home through the farm I saw that “Rosie” had calved.

Sunday 2nd  It was very showery in the morning, but it was finer in the afternoon and evening.  Willie and I went on to the farm in the morning to get “Rosie” and we found that “Cassey” had also calved and both have bull calves.  We brought them home and shut them up.
Mr & Mrs Sim & Joe Torkington came for tea, we all went down to the Hall in the evening.  Revd  E. M. Cowie held service, there were about 55 present and 19/1 collection.

Monday 3rd   It was a fine day.    Charlie came in the morning to tail our Lambs.
There were only.
Ewes                   14
Wethers              4
18
We also cleaned the Sheep.
Revd Cowie called here and staid for lunch.  Wille &and I were hoeing Potatoes in the E.R. in the afternoon.  Revd Cowie held a Confirmation Class in the Hall in the evening.  There are now 17 candidates.  After the class Mr Cowie came up and spent the evening with us, but he went down to Harpers to sleep.
Jane went to Charlie Wyatts to day to stay a few weeks.

Tuesday 4th   It rained all last night and there were several showers during the day.  I packed a box of Eggs and carried it down to the Steamer.  Mr Gregors new Steamer “Orewa” came for her first trip here.  Miss Niccol, her youngest brother and Miss Mitchell came up by her & Revd Cowie went away and his horse.  Mr Ward, an Insurance Agent came to spend the evening.

Wednesday 5th   It was very showery all day.  Got the bullocks up in the morning and hauled a Sack of Sharps and empty Egg box from wharf and a Sack of Maize from Harpers.  Mr Roose travelling for D.S.C. called in the afternoon.  I gave him an order.

Thursday 6th   It was a fine day, but a cold wind was blowing.  I was putting the netting wire on the fence between the flowers & vegetables.

Friday 7th   It was a fine day, but blowing strong.  Willie staid from School and was helping me mould up Potatoesin the E.R.  We got the sheep up in the E.R.and took one home at dinner time and killed it in the pm.
Minnie went to a dance at Dacres Hall in the evening.  Miss Fordham called in the evening and brought Minnie some flower roots.

Saturday 8th   It was a fine day.  I took the mutton out in the morning and was digging next to the Turnips.  Minnie & Willie went fishing to Ti Point and brought home several fish, Minnie caught a Schnapper weighing  10½ lbs.  Miss & Ernest Niccol, Miss Mitchell and Joe Torkington was here for tea and spent the evening.

Sunday 9th   It was a fine day, wind strong from NE and threatening for rain.  Miss Kempt was here for dinner.  I read service in the Hall in the afternoon, Miss Fordham was absent on account of indisposition so Mrs Jos Greenwood led the singing.

Monday 10th   It rained heavily last night.  The wind was NW in the morning and SW in pm.  It was a tolerably fine day, a few showers but nothing heavy.
Mr Ward called in the afternoon.
Willie staid from School and helped me dig the piece of ground below the wire netting fence.

Tuesday 11th   It was a fine day.  We got the bullocks up in the morning and hauled two loads of firewood then hauled a box of eggs down to the wharf and brought up an empty egg box and some gravel.   The “Orewa” did not come in until about 4.30 as she went into Big Omaha first.  Mr Ward came in the evening.

Wednesday 12th   It was a fine day with the exception of a few slight showers.   Minnie was at Miss Niccols all day sewing.  Willie & I went down to the E.R. in the morning and finished moulding up the Potatoes.  We took the milking cows with us and put them in there to feed.  We were digging below the wire netting fence.  A black hen that was sitting in the fowl house brought out 10 chickens.  I set Willies hen in the store on 14 Brown Leghorn Eggs that we got from Kempts.

Thursday 13th   It was a fine day.   I planted 13 Tomato Plants  and
25 Cauliflower Plants and dug out a trench and put a layer of manure on the bottom and filled it over for Peas.

Friday 14th   It was a fine day.  I sowed 1 long row of Statagem Peas next the Cauliflowers.  I commenced to dig round the Apricot trees.
Killed a Sheep in the afternoon.

Saturday 15th   It was a fine day.   I took the mutton out in the morning and the remainder of the day I was digging round the apricots.  Willie went with Ernie Niccol fishing to Ti Point and they brought home a few fish and some oysters.
Mrs Charlie Wyatt was confined of a son this morning.   viz
Dear old James, Vincent, Guthrie 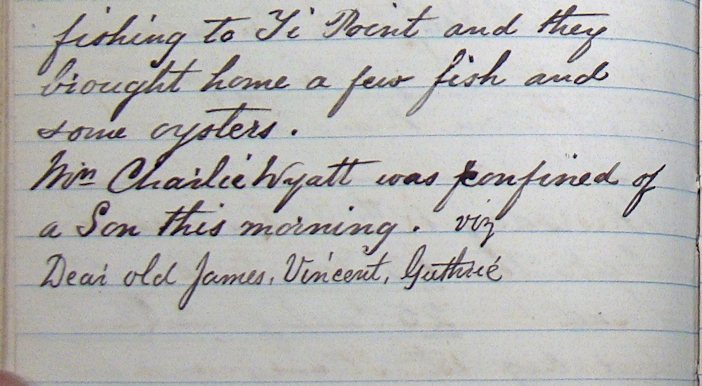 Sunday 16th   There was a heavy shower of rain about mid day after that it cleared up and it was very warm, but there were a few slight showers in the afternoon.  I went down to the Hall in the pm, but as there were so few there I held no service.
I then went across to John Wyatts to see old Mrs Wyatt and I had tea there.

Monday 17th   It rained steady last night which sunk deep into the ground which was dug.  It turned out a very fine day.  I was digging in the orchard round the Apricot trees.

Tuesday 18th   It was fine in the morning, but towards noon it came in a misty rain and continued so all the afternoon.  I finished digging round the lowest Apricot tree.  I hauled the Eggs down to the wharf in the afternoon.  The “Rose Casey” came this week she did not arrive until after 4 pm.  I had an empty egg box up and a parcel of drapery from the D. S. C.  which I hauled up.

Wednesday 19th   It was a very fine day.  I was digging in the orchard all day.

Thursday 20th   It looked threatening for rain all day.  In the afternoon it looked very black and there was a fine dusty rain, but noting to speak of, though it seemed to be raining heavily out at sea.
Alic Haskell was digging her to day with me.  We started next to the pigs paddock fence under the Beurre Diel and Beurre Capoumont trees, we turned over a large piece of ground as Alic is a quick and good digger.

Friday 21st   The wind was blowing hard all day, but no rain.  I was digging in the orchard all day.  Killed a Sheep in the afternoon.

Saturday 22nd   It was a fine day.  I took the mutton out in the morning and then dug round a pear tree in this orchard.
At 2 pm there was a meeting of the Road Board in the Hall and in the evening there was a meeting  of the Show Committee at Harpers.
Minnie rode over to Ti Point in the afternoon, she brought home several large schnappers.  Dolly calved a heifer calf in the E.R.

Sunday 23rd   It was a fine day.  Willy and I brought home Dolly and her calf.  I read service in the Hall in the pm.  J.T. was here for tea.

Monday 24th   It was very dull in the morning and it came on to rain about 9 am and it rained all morning, but it cleared up a bit in the pm.  Alec Haskell came here to dig, but on account of the rain we were most of the morning in the house, but Alec made a good show in the afternoon.

Tuesday 25th   It was very showery, very heavy rain fell in the afternoon.  I packed the Eggs in the morning and hauled them down to the wharf in the afternoon, the “Orewa” came in about 3.30.
I had 100 LBS Flour and 70 lbs Sugar up by her from Dumpers which I hauled and the return empty Egg box.  It rained again in the evening.

Wednesday 26th   The wind blew in squalls all day from the SW.
It soon dried the roads and the ground up.
I cleaned out the pig stye in the morning, grafted a Goyer apple in the orchard with Promanite.  In the afternoon I was digging below the wire netting fence and picking our convolvulus.
There was a confirmation class in the Hall in the evening.

Thursday 27th   It was a fine day, but very windy.  I was digging and picking convolvulus below the wire netting fence in the garden both morning and afternoon.
In the afternoon Charlie came over and brought word that Tom Wyatt had died in the Auckland Hospital today at 12 oclock and that Joe (?),  Martha and the deceased  were coming down by the  “SS Kawau” leaving Auckland at 8 pm.  I went down to Charlies in the evening and staid there with Ernest,  Alfie & I went down to the Wharf to meet the “Kawau“.   Charlie took down a pair of horses and sleigh and took the coffin up to Walter’s house and left it there awaiting burial.  Martha & Willie Selwood came up to our place to stay all night.

Friday 28th   It was fine in the morning, but it came on misty rain in the afternoon.  I finished digging the piece of ground below the netting wire fence.
Toms funeral was at 3 pm.  I conducted the service, the first part in Walters house and the remainder at the grave.  He was buried alongside his father,  there were not many at the funeral as a great many did not know about it.
There was an Entertainment in the Hall in the evening to get funds for a School Library at Dacres School.  Jane played in the orchestra, but none of us went.   Maud was down for the funeral and came here to stop.

Sunday 30th   It thundered and lightened and poured with rain last night, but it was very fine this morning.  Willie and Ernie Niccol rode up to Mauds returning in the pm.  I read service in the Hall in the afternoon, there were 18 present.  Jane was up here for tea, also Jim Dunning and Joe Torkington.

Monday 31st  It was a very showery day especially in the morning.
Ernest Wyatt came here to day.  We were digging in this orchard.  Took the bullocks down to the Steamer in the morning with a box of Eggs, but I did not get my box back or the Groceries I sent for as Dumper did not know that the Steamer had changed her day of leaving Auckland.