Saturday 1st   It rained all day and it was blowing a gale of wind from the SE.  I was making cases up in the shed & split a few palings.  Charlie Wyatt came in the afternoon & staid all night.

Sunday 2nd  It rained all day and still continued blowing from SE.  Charlie staid for dinner & then went home.  On account of the weather there was no service in the afternoon.

Monday 3rd  It did not rain, but it was thick and misty, and it blew very hard all day from the E.   I was splitting palings and the boys cut firewood on the hill.  Minnie & Jane went to School.

Tuesday 4th   The weather still very unsettled.  Wind still blowing from the E, but we did not have so much rain, but it was misty.  I was splitting palings & making cases.

Wednesday 5th  The weather still very unsettled.  It rained in the morning, but it cleared up a bit in the afternoon.  I made cases in the morning and the boys cleared out the shavings from the shed.
In the afternoon we mended a panel of fence in the pigs paddock & cleaned out the Pigs.
The Annual meeting of the Licensing Committee was held in the Hall at noon, and they granted Mr Mirehouse an Accommodation License at £6 per year.

Thursday 6th  The weather still unsettled.   I was splitting palings in the morning and in the afternoon I was making cases in the shed as it came on to rain.

Friday 7th  No change in the weather.  Was splitting palings and making cases in the shed.  Went to the Library in the evening.

Saturday 8th  Was a very wet day. Driving rain from the NE.  Was making cases in the shed.  There was skating in the Hall in the evening.  Willie came over & staid all night.

Sunday 9th  Very showery day.  There was no service in the afternoon.

Monday 10th  The weather still showery.  We mended up some fencing in the Pig’s paddock, also the wattle fence round the pines.  I made 2 Cases while it was raining.

Tuesday 11th  The weather still showery.  There was a social  in the Hall in the evening given by the Cricketers, Maud & I were invited, but as the roads were very muddy & the weather showery, I preferred to stay at home by the fire.  There were about 70 present.  Miss Pratt & Mr Raynor returned and slept here.

Wednesday 12th  The weather a little finer, but still a few showers.  The boys hauled some goods for Joe Wyatt also some for us.  I made some cases in the shed.

Thursday 13th  It was a fine day and the ground dried up a little.  After the 14 days of showers it is time we had some fine weather.  The boys finished hauling for joe Wyatt & hauled a bag of salt up for us.  They also hauled some firewood in the afternoon.

Friday 14th  It was a fine day.  We were chipping up & sowing grass seed on the flat on the farm.  John shot 3 Pheasants & 1 Wind Duck.  Charlie Wyatt came for tea.  Went to the Library in the evening.

Saturday 15th  The wind is blowing in from the E again, and it threatens very much like rain.  Henry went up to Pratts with the gun. John & I mended up the fence upat Neeleys.  Willie & Charlie Pratt came for tea & Willie staid all night.

Sunday 16th  Charlie Wyatt came for dinner & John Dunning was here for tea.  Wind still from the E with slight showers.  There was no service in the afternoon on account of the weather.

Monday 17th  The wind has gone round to the SW.  It was a very fine day.  Charlie Wyatt sowed wheat on the Race Course  and was harrowing it in.  Henry had not returned from Pratts.  John & I were chipping up down at the flat on the farm.  Henry came home in the evening & brought 7 Pigeons & 2 Kaukau’s.

Tuesday 18th  We were digging up on the flat on the farm in the morning.  In the afternoon we packed 2 Cases of Renette du Canada Apples, and John took them down to the wharf with the bullocks.
The wind has changed again to the E and in the evening it came on to rain.  Jessie & Annie Witten came here in the evening and staid all night.

Wednesday 19th  Charlie came early in the morning and brought some Sausages and Smoked Fish that Maggie and Mrs Runciman sent by the Steamer last night.   The boys were digging on the flat & in the afternoon cleaned out the Pigs 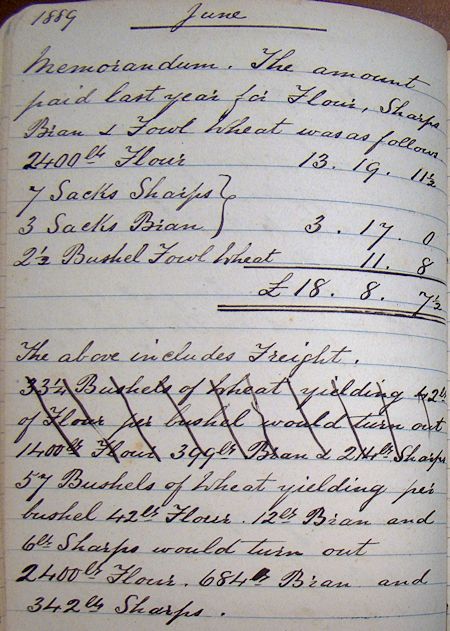 Thursday 20th  It rained very heavy last night and it was showery all day.  I made some cases in the shed.

Friday 21st  It was fine in the morning, but it came on to rain in the afternoon & evening.  I made some cases in the shed.

Saturday 22nd  It was a fine day with the exception of a shower in the middle of the day.  The boys went to Pakiri shooting, they brought home 2 Pigeons, 1 Cock Pheasant, 1 Kaka.

Sunday 23rd  I rode over to Dacre’s Claim in the morning to service.  Revd J.K. Davis officiated, there were about 30 present, and 11 received communion.  10s/6d collected.
Mr Davis rode home with me and had dinner with us, and then he conducted service at the Hall in the afternoon, there were about 50 present, 3 received communion and 10s/1d collected.
It was a fine day, but the roads are fearfully muddy.

Monday 24th  It was a fine day with the exception of a few showers.
The boys were digging down on the flat & I was making a wheelbarrow.

Tuesday 25th  In the morning we packed 1 Case Sturmer Pippin and 1 Case Lemons, 11 Doz of my own and 1 doz of Henry’s.  The boys hauled them down to the Wharf in the afternoon.
It came on to rain about 12 oclock and continued all afternoon & evening.

Wednesday 26th  It poured with rain all last night and there has been several land slips.  The Steamer came in early this morning, we had up 500 lb Flour & 1 Sack Seed Potatoes (Kidneys & Early Rose).  The boys hauled them up from the Wharf.  I was making the wheelbarrow in the shed.  I received several English Newspapers.

Thursday 27th It was fine in the morning, but very wet in the afternoon & evening.

Friday 28th  It poured with rain last night , and it rained nearly all to day.

Saturday 29th  It was a pretty fine day, only a small shower in the afternoon.  The boys cleaned out the pigs in the morning.  I finished making the wheelbarrow.  Willie came in the evening & brought us a piece of beef.
I made out the Sheep Return in the evening as follows. 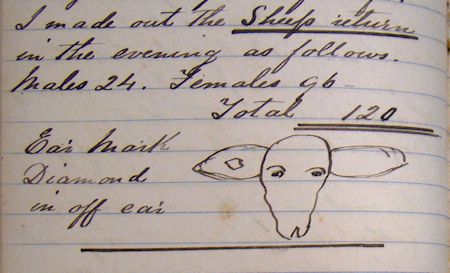 Sunday 30th  I was very bad with rhumatism & was confined to my bed.  Revd J. J. Mather preached in the Hall in the morning , there were 25 present.  There was no service in the afternoon.
Charlie Wyatt came for dinner.