Thursday 1st   There was a frost this morning, it is the first we have seen this year.  It was a very fine day.  Willie was making crates for fowls.  I was fixing up picture frames.  In the afternoon I took a picture as a present up to Willie Dunnings and also to one to Eddie Wyatt.  In the evening I went down to Archie Dunnings, we were playing cards.

Friday 2nd   It was a fine day.  I packed some parcel of Daffodil bulbs to give away.  Minnie came in the afternoon & had afternoon tea and then she & I went down to meet Joe who came up by the “Kawau“, I gave Mrs C. Wyatt some of the Daffodils & then I went round to Mrs D. Mathesons to take her some, had tea there & then Duncan put me across to the wharf in his boat so I got the two mails.  Received a letter from Lily, she said that Jack had been very bad with influenza.

Saturday 3rd   It was a fine day.  I finished making Willie’s ladder, he was busy finishing his fowl crates.

Sunday 4th   It was a fine day.  None of us went out anywhere.

Monday 5th    It was a fine day.  It was a busy day with us.  May Dunning very kindly came to help Grace.  All of us were preparing for the sale.  I went down to Eddie Wyatts to get the saw.  The Wyatts finished hauling the logs down to the beach.

Tuesday 6th   It was a dull day & wind SE.  May Dunning came up again today to help, we were all busy getting things ready for the sale tomorrow.  Willie & I went down to the Hall to get some cups to use tomorrow for lunch at the sale.  Minnie came in the evening  & staid the night.

Wednesday 7th   When we got up in the morning there was a misty rain falling & it continued all morning, but cleared up in the afternoon, but it made a lot of mud which was carried into the house.
People started to arrive for the Sale at 11 am and increased in numbers later on when there was a large attendance, men in preponderance, the weather keeping many ladies away although there were several present.  The Farmers Union conducted the Sale.
Mr Norman Russell acted as Auctioneer.  The people who had come for the sale were entertained with sandwiches & tea many ladies kindly assisted in handing round.    Some things of Willies in the store  including the separator were sold first & some tools & sundry articles in the back yard, and then the furniture &c in the dining room.  Some things were given away and others fetched a big price, Willie’s stock and impliments were sold last and realised good prices, some of the Jersey cows fetched £14.   Altogether the Sale was very satisfactory.

Thursday 8th   It was a disagreeable day, slight misty day.  We were tired after the sale and did not get up very early.  People kept coming all day to take away things they bought at the sale.
Minnie, Joe & Harold came in the pm with a sleigh and took away all their things.  Willie Harper came with a cart and took the Methven Boiler that Jim bought & a small chest of drawers that I gave Jane and was taking them down to the wharf to be sent round to the top wharf next Wednesday.
Eddy Wyatt came in the evening and paid me an installment of £400 by Cheques on the purchase of this farm , he to take possession next Monday. 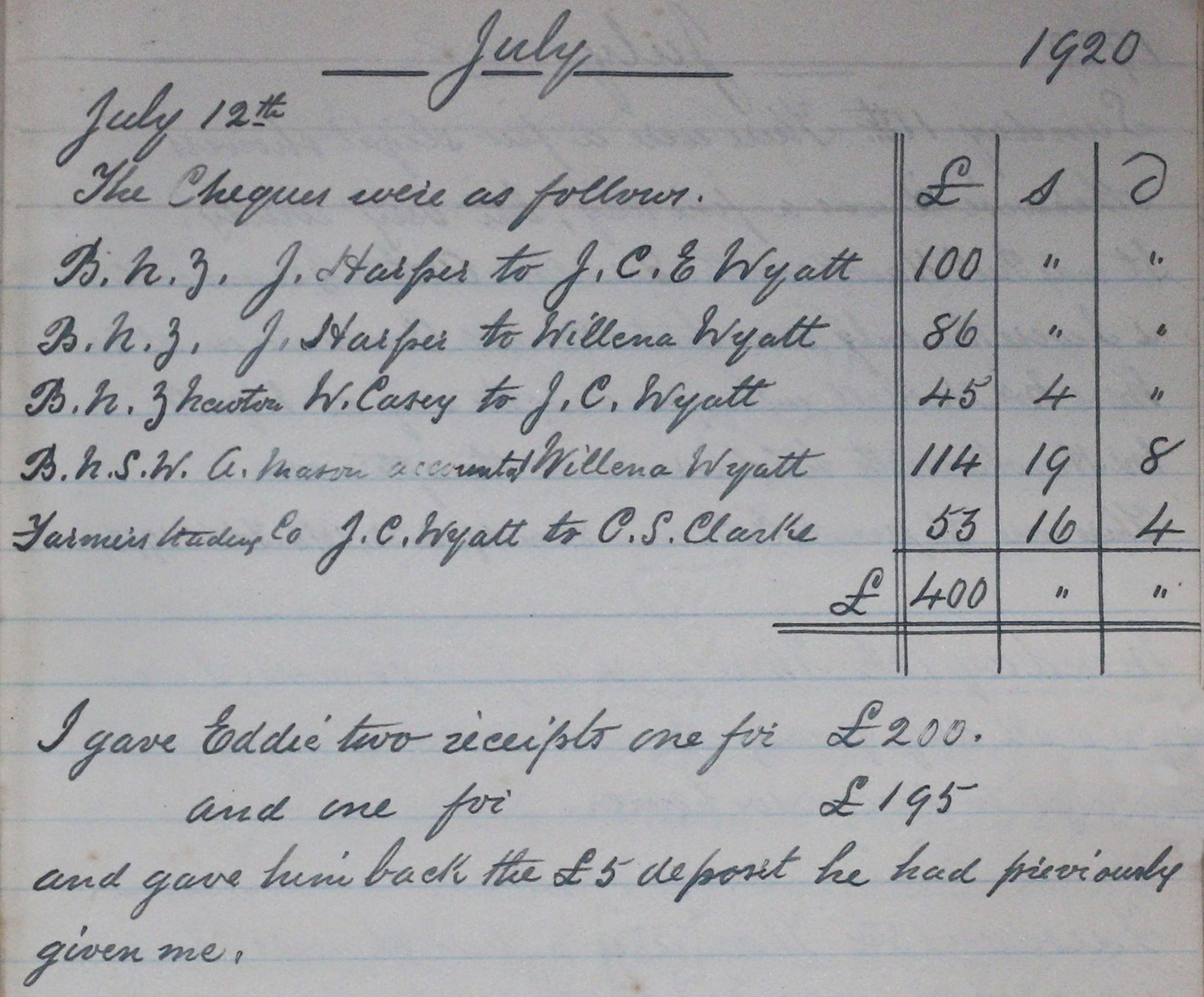 Friday 9th   A very wet day and blowing hard from NW.   I was packing up my things, went down for the mail n the evening.

Saturday 10th   It did not rain in the morning, so Jim Wyatt came up with the cart and took my furniture down to their place , I shall have a nice room in the front of their house with a fire place.  I made several journeys up to the old house to carry things down, & I got my room nicely in order.  Eddie, Ivy & Jim went to a hockey match at the Claim  & did not get back till after dark.

Monday 12th   There were a few showers.  I was busy all day going up and down carrying things to my new home.

Tuesday 13th   There were a few showers.  I was up and down carrying things to my new home.  Eddie & Jim were cutting tea tree at the back of the cottage .  Eddie hung my picture for me in my room.

Wednesday 14th   It was a fine day.  I took Mrs Arthur Greenwood some wine glasses & a jug as a present & a bag of Homestead bean seed to Mrs Gravatt, was also busy taking things to my new home.
Went down to meet the steamer & sent the Methven boiler round to the top wharf to Jim Dunning.  In the evening the settlers gave a social to Willie,  Grace and myself as a send off, it was a very enjoyable evening , there was dancing, cards, songs and a recitation by Mrs Knowles, and the ladies supplied a sumptuous supper.  Willie & Grace were presented with a salad bowls and I was presented a fountain pen with a gold band round & my initials engraved in it.

Thursday 15th   I had to get up early as I am going to Auckland today.
It was raining all day and very miserable on the “Kawau” as there was hardly a seat dry to sit on,  the steamer left Leigh at 7.45 and arrived in Auckland soon after 1 pm.  Keith Entwisle was on the wharf expecting Willie & Grace so he helped to carry my luggage to the ferry and I got a waggonette up to Mr Wallaces where I received as usual a hearty welcome.  Mr & Mrs Gordon Wallace & two children are living there as they cannot get a house.

Friday 16th   It was a very fine day.  I went across to Auckland in the afternoon and went up to see Henry who is in a private hospital in Park Road called Rawhiti, he underwent  an operation for rupture of the stomach last Monday, he is getting on very well, I went to see him in the afternoon.

Saturday 17th   It was a very fine day.  I went over to town in the morning to do some shopping, returning to Mr Wallaces for dinner.
I went across to town again to see Henry.

Sunday 18th   It was a very fine day.  Mrs Wallace & I went Trinity Church in the morning,  & Mr & Mrs Wallace & I went across to Auckland in the pm.  Mr W.  & I went to see Henry and Mrs W.  went to the General Hospital to see Mrs Tom Blair of Matakana, afterwards I went to call on Mr Woods who now lives at No 7 Franklin Road.

Monday 19th   It was a very fine day.  I went across to Auckland in the morning, had lunch at Mr James Greenwoods and then went up to Henry in the hospital.

Tuesday 20th   It was a very fine day.  I went across to Auckland in the afternoon and went up to the Hospital to see Henry.

Wednesday 21st   It was a very fine day.I went across to Auckland in the morning, went to see the “Kawau” off and then took the car out to Mt Albert, called on Canon Haselden and then went on to J. Salts. Johny was away, but Madelene was at home and I met Sarah Morris there.

Thursday 22nd   It was a very fine day.  In the morning I went to call on Mr McMurtrie who has been laid up.  In the afternoon I went across to Auckland to see Henry.  Grace,  Willie & Raymond came up to town by the “Kawau” this evening, they have left Leigh.
Mr Wallace & I went to a concert in the Town Hall at Auckland, it was given by the Auckland Choir of 78 voices, there was also a violinist very good named Miss Baker,  it was very enjoyable.

Friday 23rd   It was a very fine day.  After breakfast I went to the Entwisles at Narrow Neck,  Willie, Grace & Raymond came up from Leigh in the “Kawau” and are staying with Mrs Entwisle.  Willie, Keith & I went across to Auckland together.  I returned to the Shore for lunch.  Tom Smith, Mr Wallaces nephew from Matakana came in the pm and staid the night.

Saturday 24th   It was a very fine day.  I called at Entwisles and then went across to Auckland, called on Mr Grindrod, returned to the Shore for lunch.
There was a Football match in the Auckland Domainbetween English & Auckland in the afternoon.

Monday 26th   It was a fine day.  I was going over to Entwisles after breakfast & I met Willie coming here, so we both returned here and then we went and looked at a home in Church St belonging to Mr Duder,  Willie went across to town & I returned here.  In the afternoon I went  to town & up to see Henry who is in Rawhiti Hospital Park Road,  Henry was out of bed & sitting up in a chair.

Tuesday 27th   It was a very fine day.  After breakfast I went to Russel St  Stanley Point to enquire after a young man for Henry, afterward called on Mr D. M. Darroch, returned here for lunch and afterwards went across to town and up to see Henry – who was dressed & sitting up,  then I went to Mt Eden to Mr Grindrods where I staid for tea & evening.

Wednesday 28th   It was a very fine day.  After breakfast I went across to town with Ken  & Alma,  went to see the “Kawau” off to Leigh,  met Mr Archie Dunning & Mr Sadler, returned to Mr Wallaces for lunch.

Thursday 29th   Went to see Henry in the pm.

Friday 30th   It was a very fine day.  I took the train to Henderson in the morning, called on Mrs Handby first & had lunch there.  Afterwards called at Willie Wrights, Mrs Wilten was staying there.  I had tea there and then I went to Joe Greenwoods  where I staid the night.