Friday 1st   It rained all last night and early this morning, it then cleared up, but there was a heavy shower about 2 pm.
I went down to the village after breakfast to post a letter & then went up to the garden, I was breaking down with a fork the border next wire netting fence, the ground worked splendidly.  Jim & Albert were cutting box timber.  I went down for the mail in the evening.

Sunday 3rd   Advent Sunday.  A showery day.  Held service in the afternoon, there were 23 present.  Collection 10/-   After church I went up to W. Dunnings for [sic] and we went to Mr Grigg in the evening for some music.

Monday 4th   Slight showers in the morning and a heavy one about 1.30 pm.  Otherwise fine between the showers.  Jim went to Pakiri to spray the cattle for tick.  I planted 4 Dahlias.  Took Mrs Dunning a bunch of Sweet Peas in the afternoon and met the steamer & got the mail.  This is the last time the steamer will make the Mangawhai trip on Monday, in future it will be Friday.

Tuesday 5th   It was a fine day.  I took up all the Silver Beet and threw them over the fence for the cows.  Jim was ploughing in the pm.
In the evening I took some peas & flowers up to Willie Dunnings & spent a pleasant time.  Jim went to the Big Omaha School Concert in the Claim Hall in the evening.

Wednesday 6th   It was a very fine day.  Jim was ploughing all day.  Albert Wyatt was digging round the Lemons.
I was sticking the White Dutch Beans in the Lemon garden.
I went down for the mail in the evening.  I received a letter from my brother Henry who lives at 20 Charleville Terrace, Sydenham, London. 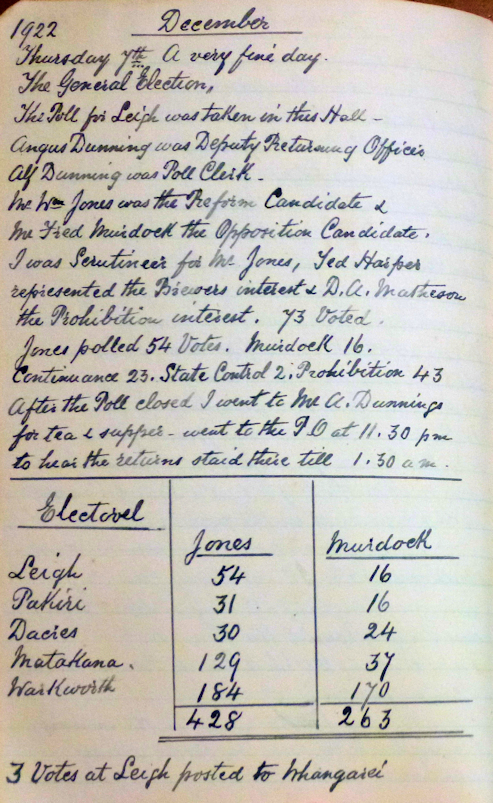 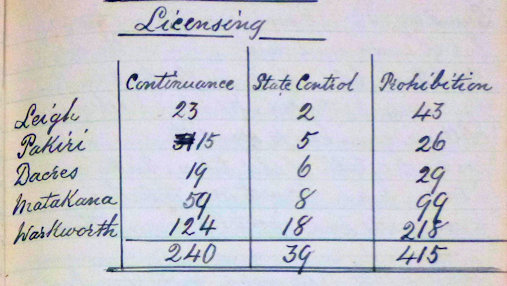 Friday 8th   It was a very fine day.  After breakfast I went down to the village, took £10 out of the P.O Savings Bank.  Was too tired to do much in the garden.  Jessie brought the mail in the evening so it saved me the trouble of going for it.

Saturday 9th   It was a fine day.  I stuck the Homestead Beans.  Jim & Albert cut down a pine tree near the lower gate and crosscutted it into logs  and Jim hauled some of it out , it is to be cut up at the mill at the cove.  Ivy, Jessie & Elva Gravatt came to see my garden in the afternoon.

Sunday 10th   It was fine during the day, but it came on a misty rain in the evening.  Revd Poole held service in the hall in the morning,  I attended.  Mr & Mrs Neeley and Willena came here to spend the day, and we had a talk of old times.  In the evening I took a bunch of Sweet Peas to Arthur Greenwoods and spent the evening there.

Monday 10th   [sic: 11th]   There was a misty rain last night and early this morning, but it turned out a fine day.  After breakfast I went down to the village to post some letters for Eddie, then went up to the garden.
In the afternoon I went down to see the mill at the harbour and then up to Charlie Wyatts.
I sowed seed of Enfield Market Cabbage near a lemon tree in the Lemon garden.

Tuesday 11th   [sic: 12th]   It was a fine day & very hot.  I sowed seeds of Broccoli in a shallow box up in my garden, went down for the mail.
Went in the afternoon to see the saw mill at the beach working.  Made 14 fruit cases after tea and W. Dunning came for them in the evening.  Posted a letter to Mr Birss.

Wednesday 12th   [sic: 13th]   It was a very hot day.  Charlie and the boys were working at the sawmill.  I was up at the garden in the morning, did some watering, picked a big bunch of flowers which I took to Gravatts in the afternoon and gave to Elva who is engaged to my nephew Jim Wyatt and I congratulated her and told her she was a lucky girl to get such a nice boy as Jim.  I went down to the wharf to meet the steamer and I got the mail.

Thursday 13th   [sic: 14th]   It was a very hot day.  Charlie & the boys were working the sawmill.  I trimmed the Tomatoes tied the stems to short sticks,  Cut the grass on the path.

Friday 14th   [sic: 15th]   It was a fine day.  A slight misty rain, but not enough to do any good.  I was up at the garden in the morning,  cut grass on the path.  Wrote a letter to my son Henry and posted it in the evening.

Saturday 16th   There were showers during the day, but not sufficient to do much good.  Jim started with the reaper & binder to cut Mrs G. Wyatt’s oats, but rain coming on he had to come home again.  Ivy & children were spending the day at Charlie Wyatts so I went down and had dinner there.  In the afternoon and evening I was forking out convolvulus  in the lemon garden, and trimming & tieing up the Tomatoes.

Sunday 17th   It was a fine day, but dull.  I went up to the garden in the morning.  In the pm the new Methodist minister (Revd Haynes) held service in the hall, I attended, I had tea at Willie Dunnings and afterwards went to call on Mr Hewett, returned to W. Ds and we went in to Mr Griggs and we sang some Xmas hymns.  It was a very dark night, they lent me a lantern and Eddie saw me down to the road, soon after I got home it commenced to rain.

Monday 18th   It rained during the night and all this morning, it cleared up a little in the afternoon.  I went up to the garden in the afternoon.  I cleared out the front bedroom where I had tools &c, also cleared the verandah, as the Kirks are coming down on Wednesday to occupy the house.  Picked some peas & citrons for Jane.

Tuesday 19th   It was a fine day.  Wind SW.  I went with the cream cart to Jims ready for the school concert this evening.
It was a concert got up by Mr Stewart in aid of the Ti Point school garden.  Mr Stewart gave a lantern lecture entitled Jacob Marley’s Ghost taken from Dickens’ Xmas Carol.  Mr Stewart read the narrative very well and the pictures were very good,  there were a few songs and Harold Torkington gave a comic reading,  there was supper and a dance,  Jim, Jane and family & I went,  I staid the night at Jims.

Wednesday 20th  It rained heavily during the night, it was fine in the morning, went to Jack Waldens store.  In the afternoon Jim drove me back to Leigh.  After I came home I had tea and went down to meet the steamer,  Willie, Grace & Raymond came up, they will be staying at Gozars ,  Mrs Kirk and the boys also came up, they are going to occupy my old house, Mr Kirk is coming by Fridays steamer.
Jim returned from Pakiri in the evening, he has been reaping yesterday & today.  Eddie carted some fruit down to the wharf in the evening and then he carted Mrs Kirk’s luggage up to the old house.  Mrs Kirk & the boys staid the night here.

Thursday 21st   It was a very fine day.  I got up early and was forking out convolvulus in the Lemon garden.  After breakfast I went down to Gozars to see Willie & Grace who are camping in their shed.  Saw the steamer off, the Grigg family left by her for their holidays.
Lodged £16 . 5 . 0  in the P. O Saving’s Bank then went up to the garden, I planted the young plants that Willie brought up from Auckland as a present for me viz – 3 Red Salvias,  3 African Marigolds,  2 French Marigolds,  4 Zinnias,  3 Petunias.  Jim hauled some pine logs down to the saw mill and the reaped Oats for Mrs G. Wyatt.

Friday 22nd   It was a fine day.  I went down to the P.O after breakfast to post some Xmas cards, called at Gravatts and then went up to the garden, was preparing ground for plants as I am expecting some this evening.  Willie came to see my garden in the afternoon.
I went down for the mail in the evening.  Hay sent a box of flower plants by the “Kawau” and Yates sent some by post.  There was a Xmas tree in the Hall in the evening, there was a big crowd of children & grown ups,  Minnie & Jane and their families were present, I did not stay for supper, but came home.

Saturday 23rd   A dull morning.  I got up early and went up to the garden & commenced planting the plants that came last night.
I went home for breakfast and returned to the garden again.
As I saw it was coming on to rain I hurried and got all the things planted, before it commenced to rain.  As there were more plants than I wanted I gave some to Ivy, Maggie & Teddy Dunning.  It commenced to rain about noon and it rained all afternoon.

Sunday 24th   It was blowing very hard last night, there were one or two slight showers today.  I went up to Willie Dunnings in the afternoon to take the children some flower plants, staid for tea.
I conducted service in the Church in the evening, there was a good congregation – (30)  Collection 14/4 .

Monday 25th   Christmas Day,  weather fine.  I rode over to the Claim in the morning to spend the day with Jim & Jane,  went up to Bowden Birdsalls & called at Evans’ before dinner.
Revd Addenbrooke held service in the Claim hall at 2.30, there were about 18 present.  Mr Addenbrook had tea at Jims,  afterwards I returned home.  Mr Addenbrooks held service in this Church at 7.30.  There were about 32 present  Collection 15/- .  After church Mr Stewart gave a lantern lecture (Dickens’ Christmas Carol).  There was a large attendance in the hall.

Tuesday 26th   It was fine, dull day in the morning, the sun came out in the afternoon.
There was a Tennis Tournament on these courts,  Eddie & Jim entered, but were knocked out first round.  I was working in the garden all day planting out Asters, loosening the soil that had been beaten down by the last heavy rain .
Grace & Mrs Gozar came up to see my garden in the afternoon. There was a dance in the hall in the evening, all the young people here went, I staid at home.

Wednesday 27th   It was a fine day.  Jim went to Pakiri to spray cattle for tic.
I was up at the garden morning & afternoon, planted a Dahlia.  The steamer made a round trip.  Went down for the mail in the pm.  Charlie & Eddie were picking Lemons, they sent away 12 bushel cases.

Thursday 28th   It was a very fine day.  Jim took the reaper over to Ti Point to cut Oats for Mr Ruth.  Eddie was working at the sawmill,  Ab Wyatt was working here picking Lemons.  I was working at the garden.  I cut grass on the paths.  I put permanent stakes to the Tomatoes.

Friday 29th   It thundered and there were a few slight showers.  Jim & Albert cut down 2 pine trees near the lower gate.
I planted 5 Asters.

Saturday 30th   It was a very fine day.  I was up at the garden both morning and afternoon, but can’t say I did much work.  I planted some Sweet Peas that were growing in a flower pot.  Went down to meet the steamer from Auckland – Willie & Grace may be going back to Auckland to night by the return steamer from Mangawai.

Sunday 31st   It was a very fine day.  I went up to the garden in the morning.  I conducted service in the Church in the afternoon.  There were 17 present.  Collection 11/-
Ivy drove me over to Janes in the evening where I staid the night ready for the sports tomorrow.