Tuesday 2nd  It was very showery in the morning with strong wind, it cleared up in the afternoon.   I sent £4.2.6 to Earle & Montgomery.

Wednesday 3rd  We commenced digging next the Golden Cluster Apple Trees, planted a few hills of Pumpkins – seed from Joe Greenwood.  Went over to Frearson’s and got out 3 sheep – (2 Hoggets, 1 Ewe in lamb).  Molly calved, a heifer calf, brought her home in the evening.
I am much troubled with slugs in the garden since the rain.  I go out every night on the onion beds and kill thousands with lime.

Thursday 4th  It was rather dull the first thing in the morning, but it turned out to be a very fine day.
We killed Molly’s calf in the morning .
We continued digging and planting Pumpkins.  The Girls went to the beach opposite the Goat Island.

Friday 5th  I stuck the two rows of Veitch’s Perfection Peas.  The boys continued digging, but as the ground is so full of sorrel we could not plant anything.

Saturday 6th  We continued digging where the sorrel is so thick.
In the afternoon it came on to rain and it rained very hard.

Sunday 7th  It was very showery.  Read service in the afternoon there were only 21 present.

Monday 8th  The girls went back to School  to day, after the Michaelmus Holidays.  The ground was very wet after the rain we had on Saturday & yesterday.
We could not do any planting, we dug round the Lemon Trees.  I moulded up again the first planted Potatoes, they are looking very well, but the strong winds we have had lately have knocked about the tops very much.

Tuesday 9th   We planted Negro Beans next to the others  on the far side of the orchard where the early Pink Eye Potatoes were planted, we planted them in drills 2 ft 6 in apart, manure in the trenches & bone dust in the drills.  The wind was very strong from the SW.
Miss Pratt came & staid all night.

Wednesday 10th We finished planting Negro Beans.  We pulled down the old manure heap in the orchard and made it further down.

Friday 12th  Finished planting Mangold Wurzels.
Commenced sowing Cucumbers the opposite side of the path.

Saturday 13th  We finished sowing Cucumbers in the morning.
I cleaned out the pigs in the afternoon and put the manure into the new manure place in the orchard for the first time.
Maud & Henry went up to Pratt’s and staid all night.  I went over to Big Omaha in the afternoon, called in at Mr Savage’s & then went on to Mr Ashtons where I had tea and spent a very pleasant evening.  I had a look round their place, also Mr Hadwicks, they have very nice gardens and seem to be getting on very well.
I received from Mr Kirkbride a volume of Sermons, also two numbers of Church Bells.

Sunday 14th  Read service in the afternoon, there was only 17 present.  Mr Dause was preaching over at Dacre’s Claim and most of the young people had gone over there.
Henry returned from Pratts in the evening, but Maud remained.

Monday 15th  We went down to the beach with the bullocks and got a load of sea weed.  Maud came home from Pratts in the afternoon.

Tuesday 16th  The boys took the bullocks down to the beach and got up two loads of sea weed.  Mrs Walters came up by the Steamer. I received Webb’s catalogue of Seeds from my brother John.
George Pratt  came & staid all night.

Wednesday 17th  We were nearly the whole day picking out Convolvulus between the Potatoes.
Planted one row of Red Cabbage.  Went up to Mr Walter’s in the evening, they gave me a lot of vegetable & flower seeds.

Thursday 18th  In the morning we resowed the Parsnips with seed given me by Mr Walter.  In the afternoon we sowed 3 rows White Stone Turnips,  2 rows Purple Top Turnips  and  3 rows Mangold Wurzels.  We also commenced planting Water Melons in the ground that the Turnips were in.  We dug manure & sea weed in, and sifted the soil to plant the seed in .
Maud went to Mr Walter’s in the evening.

Friday 19th  We finished sowing Melons.  There are 15 hills of Water Melons, 3 hills Rock Melons.
We dug 9 barrow loads of manure and 3 sleigh loads of Sea Weed into the ground, we sifted the soil to sow the seed in and covered the surface with sand.
In the evening the boys & I  went over to the Hall at Dacre’s Claim to an entertainment to raise funds to purchase an harmonium for their Sunday services.   It came on to rain and rained very heavily, we got home about 2.15 am.

Saturday 20th  The rain we had last night has done a great deal of good but the ground in this orchard was too wet to dig, so we went over to the other orchard and made a start there.  In the afternoon I cleaned out the pigs, planted out a row of Cabbages and I dug some Potatoes for tomorrow, they are Early Rose that grew against the land slip and were planted on July 23rd hardly three months.

Sunday 21st  Mr Geo Moor held service in the morning.  John Greenwood came up here for dinner, Willie & Charlie Pratt walked over and were just in time for dinner.  I read service in the afternoon, there were about 36 present.  It came on to rain just as we came out of Church and was a very heavy shower.  Alec Haskell, Wm & C. Pratt  came up for tea.

Monday 22nd  Mr Geo Moor came here on Saturday to value for the Property Tax Department.  He valued all my freehold property here at £450, being a reduction of £50 on the last valuation.
We dug in the farm orchard in the morning and about ½ an hour in the afternoon.  It poured with rain in the afternoon and we had to leave off and we cut up some Scotch Thistles.
It rained also very heavy in the evening.
Filled up my Property Tax return this evening, as follows – 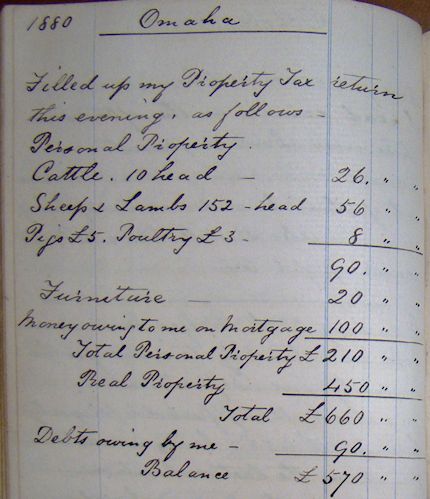 Tuesday 23rd  We were digging in the farm orchard both morning and afternoon.  Heavy showers and strong wind.  The Steamer came in the evening and brought our flour & Groceries.

Wednesday 24th  The boys hauled our goods up from the wharf in the morning.  It was very showery, we were unable to do much out of doors.  Mrs Walter went to Auckland in the Steamer this morning.

Thursday 25th  “May” was bulling this morning, we took her over to D. Mathesons, but she was off when we got over there.
We had a few showers, but it was much finer than it has been for the last few days.
We were digging in the farm orchard.

Friday 26th  We were digging in the farm orchard, both morning and afternoon.  I went to the Library in the evening.

Saturday 27th   “Spot” calved in the morning, a fine heifer calf.  We were digging in the farm orchard in the morning.  The boys went fishing in the afternoon.
I planted Sunflower seed and 6 hills of Small Crown Pumpkins near the front gate.

Sunday 28th  It was a fine day.  Read service in the afternoon, there were 29 present.
Willie P. , Walter Wyatt and Eva Frearson came here for tea.  I went to Selwood’s in the evening and had a look round their orchard & garden.  Their place looks very nice.  They have a great quantity of Field Peas planted nearly ¾ of an acre.

Monday 29th  We moulded up the Breese Prolific Potatoes in the morning,  in the afternoon we weeded the Onion beds.  Mrs Ashton and Charlie Wyatt came in the afternoon and staid for tea.
It came on a dusty rain in the evening.

Tuesday 30th  We dug in the Farm orchard morning and afternoon.
Miss Pratt came and staid all night .  Wrote a letter to Revd M. Kirkbride.

Wednesday 31st  Mrs Witten called in the morning.  Mr Mirehouse, Bowden and Tom Birdsall & Mr Sadler came here and brought a young horse to put a halter on it break it in.
We were working about the house today, cleaned the pigs out, weeded and loosened between some of the Onions.  Planted one row of Selected  Tall Marrow Peas – in a manured  drill, partly with cow dung and partly pigs manure.
Maud went to Handby’s and staid for tea.