Sunday 1st   There seems to be a change in the weather, we had a few showers.  Read service in the afternoon.  There were only 22 there.

Monday 2nd  We had several showers of rain last night.  We fixed up the fence round the School we also banked up the soil under the bottom wire of the Bailey Paddock fence.  Maud returned from Pratts in the afternoon accompanied by Miss Pratt who staid all night.

Tuesday 3rd  We mended up the Orchard fence on the farm in the morning, also the fence at the Koeroa,  Frearson’s side.  In the afternoon we dug around the Pines below this Orchard.

Wednesday 4th  The boys were hauling for Mirehouse in the morning.  I was digging in the garden.  Tom Pratt came for dinner.  We were wattling the fence from the far slip rails to the stockyard.

Thursday 5th  We finished wattling the fence and we fixed up the slip rails.  It was a very fine day.

Friday 6thSaturday 7th  Frearsons came in the morning and took 16 sheep away belonging to them.  We killed a sheep that we brought up from the beach yesterday.  Henry & I mended up the fence down at the Koeroa, Frearson’s side in the afternoon, also over Haskill’s side.  John went up to Pratt’s in the afternoon.

Sunday 8th It was a fine day.  I read service in the afternoon there were about 30 present.  Charlie & Walter Wyatt came for tea.

Monday 9th  We finished digging the ground intended for Potatoes.  This part is full of Convolvulus.  Mr Walter came for tea and spent the evening.

Tuesday 10th  It rained last night and all this morning, but it cleared up in the afternoon, the boys cut tea tree on the farm, I wrote a long letter to John also sent him a newspaper.

Wednesday 11th  The boys hauled up from the wharf, the following goods that came by the Steamer last night.
1 Sack Table Potatoes, 1 Do Maize, 1 Do Bran
I was cutting tea tree on the farm in the morning & the boys & I were working at the same in the afternoon.  The weather was very showery and wintery.

Thursday 12th  It was a fine day.  We were cutting tea tree on the farm both in the morning and afternoon.
Tom Pratt came in the evening staid for tea and took the horse home that Mr Pratt left here on Tuesday evening.
Maud and Henry went to Mr Walter’s in the evening.
Now that the fence is completed going up to the school I will give some description of it & its,  the posts are 6ft 6 in long sunk into the ground 2 ft being 8 ft apart, pickets are driven into the ground between each of the posts and 5 of the wires are stapled to the pickets, the posts are 4 ft 6 in out of the ground  and the top wire 4 ft.  The cost was as follows

The above is the total outlay, the labour with the exception of splitting some of the posts we did ourselves.  The length of the fence 26 Chains.  Average cost per Chain for material  4/11½ . 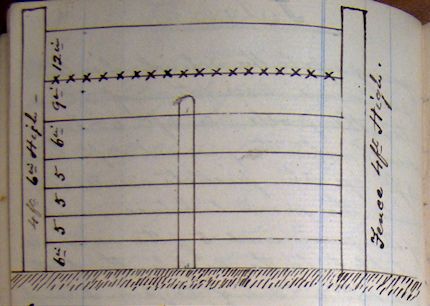 We used 35 Rollers in the construction of this fence 12 were of Iron and the remainder 23 we made of Puriri.

Friday 13th  It was fine in the morning.  Henry & I took Nelly over to Birdsall’s to his bull, he had gone to Warkworth in the morning and there was only Mrs & Miss B.  at home, it commenced to rain as soon as we got over there and continued until about 2.30 when we started home, we arrived at home a little before 5.  There had not been so much rain over this way.  John was cutting tea tree on the farm during our absence.
John & Minnie went to the Library in the evening to change my book.

Saturday 14th  We were cutting tea tree on the farm in the morning. The boys went fishing in the afternoon.  I was working in the flower garden.

Sunday 15th  It rained all last night and this morning, the Revd Mr Mather was to have preached in the morning but it was too wet.  I went down to the hall in the afternoon, but there was no service.

Tuesday 17th  Not quite so windy today, a few small showers.
We continued cutting tea tree on the farm both morning & afternoon.  Wrote to Messrs Earle & Montgomery enclosing
£4.3.8 in payment of their account.
The “Rose Casey” did not come this evening.

Wednesday 18th  The boys went down with the bullocks to Mirehouse’s to get a sack of Sharps for the Fowls also some sand from the beach also for the Fowls.
In the absence of the boys I cleaned out the Pigs and gathered up all the manure in the little paddock.  We finished cutting the tea tree the other side of the Koeroa creek and we commenced to cut this side of the creek Frearson’s side, in the afternoon.

Thursday 19th  It was a fine day. We were cutting tea tree in the big clearing morning & afternoon.  The “Rose Casey” came in the afternoon.  Mrs Walter & George came up.

Friday 20th   We were cutting tea tree on the farm.
We got up the sheep in the afternoon, put out 8 of  Frearson’s into his place, and kept one of our own in to kill.
I went to the Library in evening.

Saturday 21st  We killed the sheep in the morning, and cut tea tree on the farm.
In the afternoon I went over to Tea Point to John Smith’s place .  It was a very fine day.

Sunday 22nd  It was a fine day.  I read service in the afternoon, the congregation was larger than usual.  It rained a little in the evening

Monday 23rd  It was a fine day the ground not much wetted with the rain we had last night.  We planted Early Rose Potatoes near the land-slip in trenches 2 ft 9 in apart with bone-dust.

Tuesday 24th  We had a little rain last night, but it was a very fine day.  We were digging at the bottom of the orchard below the apricots.  The steamer came in early and came alongside of the wharf.

Wednesday 25th  It was a fine day.  The boys were hauling in the morning for Mirehouse.  I was pruning the trees in this orchard.
We were cutting tea tree in the afternoon, over on the farm.

Thursday 26th  A very wet day.  Were not able to do anything out of doors, made some shallow boxes to put seed potatoes in.

Friday 27th  The boys finished hauling up goods for Mirehouse in the morning.  I was pruning fruit trees in this orchard.  In the afternoon it was rather showery, we commenced to make a new sleigh in the shed.

Saturday 28th  In the morning we were clearing and digging at the bottom corner of the orchard.  In the afternoon I cleaned the pigs out and gathered up all the manure in the pigs paddock.

Tuesday 31st  We had a little rain last night and a few showers this morning.  I made a fruit case in the morning and we finished making the sleigh in the afternoon.  The “Rose Casey” came in early & went out same evening.  Rainfall quite 1 inch under the average of the previous 21 Years.