Friday 1st  The ground was too wet to dig, so we continued to fall scrub, the other that we fell is quite dry.

Saturday 2nd  Went over to Speedwell in the morning to fetch some clothes.  Mr & Mrs Anderson came over in the afternoon to have a look round, I went back part of the way with them and then I went on the Mrs Kirkbrides.

Sunday 3rd  It was a fine day.  Went to call at Mr Porter’s in the afternoon, went on to Mrs Andersons where I staid for tea after which I accompanied them up to Mrs Kirkbrides to attend evening service.

Monday 4th  Joe Anderson came on to work today, I am going to give him a months trial.  The Revd Mr McKinney of Mahurangi came to call on me in the morning accompanied by Mr Angus Matheson.
We continued to dig up ground in the morning & went over to Speedwell in the afternoon, we gathered in a great many Pumpkin and Maize.
Mr McKinney held a service at McKenzies house at 6 oclock in the evening, we all went to hear him, I should think there was  from 25 to 30 persons present, he gave us a very good sermon, I enjoyed the whole service  very much, I wish we could get someone to preach to us oftener.

Tuesday 5th  We had several showers of rain during the day.
Mr Whitten came in the morning and staid for dinner, I gave him an order for some Fruit Trees.   We continued to dig ground.

Wednesday 6th  We continued to dig.  Went over to Speedwell in the morning to fetch some four, Maize etc.  We had several showers during the day.  The “Stag” arrived in harbour in the morning from Auckland.  The “Dot” was also in port.  Wind very strong.

Thursday 7th  Tom went over home to take over some things.
Mr Whitton brought me over some cabbage plants.
We continued digging.

Friday 8th  Mrs Porter came over in the morning to bring my clothes. I went over to Mrs Andersons and Mr Porters in the morning.  We continued to dig.

Saturday 9th  Continued to dig the ground, we planted out the Cabbage Plants, 5 rows 2 ft apart from row to row & 2 ft apart in the row, they are a splendid sort, called ‘Emperors’.  Tom & I went over to Mr Wyatts in the evening, while we were there it came on to rain very fast.

Sunday 10th  We had a few showers during the day.  Joe & I went to Mrs Andersons for dinner to help them discuss  a turkey, we went up to Mrs Kirkbrides in the afternoon.

Tuesday 12th  Continued to dig.  Tom went over home to make a rake.  Mr Porter came over in the morning.  I sowed the Oates in the afternoon and Tom raked them in.

Wednesday 13th  I went to Pakiri to see if there were any letters, returned through Mr Whitton’s place and had dinner there.  The “Agnes” arrived in harbour during my absence, Black Charlie is Captain of her, Mr Anderson sent up by her two little sow pigs for me, Tom & Joe went on board and brought them home.

Thursday 14th  Yesterday during my absence Tom & Joe commenced hoeing up ground on the bush land for Wheat, we continued also to hoe up today, the soil is very loose and the stumps come out very easily.

Friday 15th  We all hoed up in the morning, in the afternoon Tom went over to Great Omaha to go down to Auckland in the Cutter “Agnes“.

Saturday 16th  We continued to hoe up in the morning.  In the afternoon I went over to Speedwell to bring over some little potatoes  and vegetable marrows for the pigs.  Joe went over to Mrs Kirkbride’s to get some butter.

Sunday 17th  The weather is very fine for this time of the year, a little rain would do a great deal of good now.  I went over to Mrs Kirkbride’s in the afternoon,  Mrs & Tom Anderson were there. 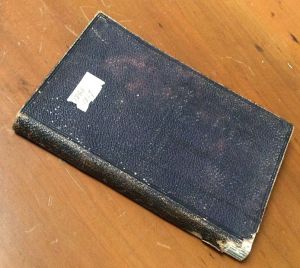 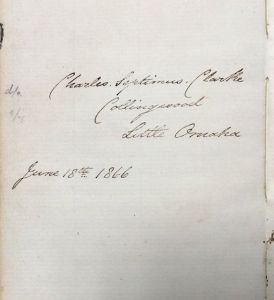 Monday 18th    Battle of Waterloo Day.  Joe & I went over to Speedwell the first thing in the morning to fetch some flour & maize, on our way down at the edge of the bush we saw a red & white cow with a little calf by its side of the same colour, it turned out to be my cow ‘Starry’, Joe & I hunted after them to try & drive them into the stock yard, ‘Starry’ was very quiet but the calf was very wild, so that we had a fine chase after them over the fern hills and through the bush, at last we got them down on to Kiri’s flat and from there up to Mr Wyatt’s stock-yard where we bailed up the cow & caught the calf and put a rope round its neck, we staid for dinner at Mr Wyatt’s after which John Wyatt helped us to get the  cow & calf home, we put the calf in the shed next to the pigs place, we tried to milk the cow but she would not give her milk down, but we gave what little she did give to the calf mixed with a little warm water and flour, after we had milked the cow we put the bell on her and let her out of the stock-yard, John Wyatt stayed for tea.

Tuesday 19th  Starry had strayed over to Mr Wyatts stock-yard  during the night,  John brought her home early in the morning,  she gave half a bucket full of milk,  I took Mrs Anderson over about a quart of milk,  Joe & I went over to Speedwell to get some thistles for the cow.  In the afternoon we cleaned the calf place out and cut some raupo and put down in it.

Wednesday 20th  It was a fine day.  Continued to hoe up ground, we cut off three rimu logs for rails.  The calf is a very little trouble now it will drink out of the little tub with just my finger in its mouth.

Thursday 21st  The cutter “Agnes” was in harbour this morning, she arrived last night at eight oclock.  Tom Wyatt came down by her, also Joe, who is come down for a holiday.
Red Kenneth quitted the house today and he and all his family went up to the Waipu by the “Agnes“, we cleaned the house out  and removed into it in the afternoon, John & Joe Wyatt came for tea  & Jim & Herbert Anderson came in the evening.

Friday 22nd  We had some rain during the night and it rained during the morning, but it cleared up during the afternoon.  Tom & Joe went to Speedwell with the horse and fetched home 200lbs of flour and some potatoes.  There are seven vessels in the harbour.    Mr Dyer’s man came over in the morning to know if I would lend him my working bullocks for about 3 months, so I agreed to lend them to him for £1 per week, and he is coming over either tomorrow or Monday to get them up.  Tom & I went over to Speedwell in the afternoon to get the maul and wedges, we split part of a log of the heart of rimu for rails. it split very well.  We killed the old drake in the afternoon.

Sunday 24th  William Dyer & Joe went out first thing in the morning to look for the bullocks, but returned without seeing them.  Jim Anderson came for dinner, we cooked the drake & a plum pudding.
I walked over to the Andersons in afternoon.  We shut the ducks up in the whare last night and this morning we found one egg.  It was a splendid day, very warm and serene for this time of the year.

Monday 25th  Tom & I went to Great Omaha to Mr Meiklejohn’s with the horse the first thing in the morning to buy some fowls,  I bought thirteen, I think they are of the pure black spanish breed.  It is nearly three years since I was at Mr Meiklejohn’s last so that I see great improvements.

Tuesday 26th   It was a very blustering day, it blew quite a hurricane, Tom went two journeys to Speedwell to bring over flour , maize, pumpkins, potatoes etc.   Joe &  I  split some rails out of the heart of rimu.

Wednesday 27th  It rained very heavily last night accompanied by strong wind, a little rain came into the house, we finished splitting rails.  Made a large fire and burnt up the sap  that came off the rails.  The Oates are coming up very well down against the swamp, all the cabbage plants are dead that we planted there, I therefore sowed Oates on the ground that they occupied.  We cut some raupo and put it into the pig-sty for bedding.

Thursday 28th  It rained very heavily during the night accompanied by wind and thunder, it was also showery during the day.  We put up the fence round the piece of ground I am going to sow with Wheat, made fires to burn off rubbish.

Friday 29th  The weather was showery.  We finished fencing in the enclosure for Wheat.  Tom & Joe continued hoeing up in the afternoon, I churned and made 1lb 4½oz of butter.
Mrs Monkhouse called in the morning on her way to Great Omaha, en route for Auckland.

Saturday 30th  It was a fine day.  John Wyatt came over in the morning to borrow the horse to go to Matakana to have a tooth out.
We continued to hoe up for Wheat.  Went over to Speedwell in the afternoon to fetch maize & potatoes.  William Dyer came in the evening and staid all night.  The “Agnes” arrived in harbour in the evening from Auckland.