Friday 1st    The stockyard was too wet to continue shearing, so we commenced to put the wire on the fence on the hill behind the house.  We killed a Sheep in the evening.

Saturday 2nd   It was a fine day.  We continued shearing and finished them in the evening.  Mr McKee called in the afternoon, he is on a visit in the district.  Willie returned from Tomarata in the evening.

Sunday 3rd   It was a fine day.  I read service in the Hall in the afternoon.
Mrs Harper & Miss Mills  came up with us after service and staid for tea, when we returned home we found Miss Pratt  and Mr Rayner at the house.  There was a very heavy thunder storm and pouring rain.  Miss Pratt and Mr Rayner staid all night.

Monday 4th   Willie returned to Tomarata in the morning and  Miss Pratt  and Mr Rayner returned home.  Henry was fixing up the boat.  We packed the Wool in the shed in the afternoon.  2 Bales of ours and a Dump from the Sheep on Willies place. 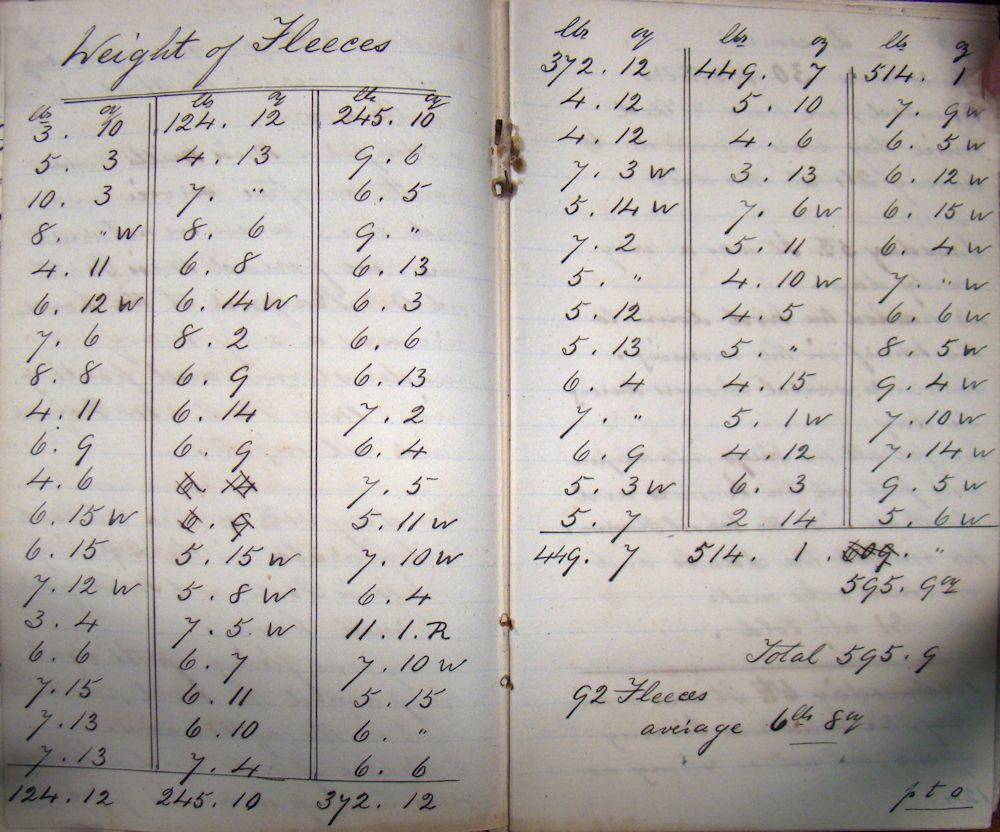 There were 30 Wethers sheared, we have killed since they were sheared 6 leaving 24 at this date.

Tuesday 5th   It was a very windy day.  We hauled the Wool down to the Wharf in the morning.  There were several showers during the day.  We got all the Sheep into the pen, and put all the Wethers and the Ram into the School Reserve.  We counted the Lambs and could only make 31 all told.

Wednesday 6th   It was a fine day, the wind was blowing strong, but not so strong as it did yesterday.
We were putting the wire on the fence on the top of the hill.  The Steamer has resumed her summer trips again, she was to have come in at 4 pm, but it was more than 6.30 before she came in .  There was a great quantity of Wool went away.  The house on the Wharf was quite full, and there was a lot on the Wharf, the largest quantity that has been sent away at one time.  We had a box of groceries and a bag of sugar from Smeetons.  Mr Handby hauled it up to the bottom of our road.

Thursday 7th   It was raining when we got up in the morning, we milked the cows without getting very wet.  There were some very heavy showers in the morning, but it was pretty fair in the afternoon.  We finished putting the wire on the fence on top of the hill.   Henry hauled the boat he bought of Harper down to the beach after tea.
There was a magic lantern entertainment  in the Hall in the evening , illustrating the British Navy,  Maude and Henry went to it.

Friday 8th   It was a fine day.  Henry was cutting ti tree on the farm near the E.R.  I was stapling the wire on to the fence on the top of the hill.  Daisy was bulling, so we put her into Matheson’s paddock to the bull.  We killed a Sheep in the evening.  There was a School treat at the Maori Hall Dacre’s Claim.  Minnie went in the afternoon and Jane and Henry went in the evening.
Mr Archibald Finlayson, Mrs D. Matheson’s brother died this afternoon.
The Petition to upset Mr Greenwoods election on the County Council was heard at Warkworth today, and the election is upset and there is to be a new election next month.  I went to the Library in the evening.

Saturday 9th   It was a fine day, but there was a shower in the evening .  Henry cut ti tree in the morning and he went out fishing in the pm.  I was sticking some of the beans that were re-planted, dug between them and also between the Water Melons.  Wille returned from Tomarata in the afternoon.

Sunday 10th   It was a fine day.  Mr Archibald Finlayson was buried in the Cemetery in the afternoon, there was a large number of people attended.  Mr G. Knaggs read the service at the grave.  Mr & Mrs Handby came here for tea.

Monday 11th    It was a fine day.  Willie Pratt stayed at home this week to help us.  He and Henry cross cutted a Kauri log in the E.R. to split Shingles out of.  I was weeding the Parsnips etc.

Tuesday 12th   It was a fine day.  Willie and Henry continued cross cutting and splitting the Kauri in the E.R.   I cleaned out the calves places and bedded them with rushes, also finished sticking the beans and dug between them.

Wednesday 13th   It was a fine day.  Willie finished splitting the Kauri tree in the E.R.  after that they fell the dry Kauri near the creek.
The Steamer came in about 1 oclock having come direct from Auckland.
I was hoeing between the Kumeras.

Thursday 14th    It was a fine day.  Willie and Henry were sawing up and splitting  into Shingle billets the dry Kauri near the creek.  I was working in the garden hoeing between the Negro Beans and Cabbages.

Friday 15th   It was a fine day.  Willie and Henry finished splitting all the Kauri they think we will want .  I was hoeing between the Kumeras and the Pumpkins.
Mrs D. Matheson called here in the afternoon and staid for tea.
I went to the Library in the evening.  We killed a Sheep.  Had a heavy shower of rain at 10 pm.

Saturday 16th    It was a very fine day.  Willie and Henry were cutting ti tree on the farm .  I was digging between the Pumpkins and weeding the Parsnips.
Mr E. Morrison of Warkworth came here for tea, he went down to the Hall with us in the evening, there was a meeting of the Farmers and Fruitgrowers Association in there were not many members present.  Mr Morrison read a very interesting Paper on Fruitgrowing.   Mr Morrison returned with us and staid all night.

Sunday 17th   It was a very hot day.  Mr Morrison had a look round my orchards and then started for home.  I read service in the Hall in the afternoon.  Miss Wann came up here for tea, George and Sarah Pratt were also here.
The infant son of Mr G. Ashton died this morning of convulsions.

Monday 18th    It was a very hot day.  Willie Pratt was working with us this week, he and Henry were cutting ti tree on the farm.  I was cutting Rib Grass Seed in the orchard and weeding the Parsnips.
Mr G. Ashton’s baby was buried in the new Cemetery Dacre’s Claim, it was the first interment that has been made there.  Maud and Minnie went over.  I went up to Mr Handbys in the evening.  Willie and Henry went fishing, they caught 4 Schnappers and 2 Cray Fish.

Wednesday 20th   We had a shower in the morning and it set in quite wet in the afternoon.  Willie and Henry were cutting ti tree on the flat .  I went down to the Steamer she did not come in until 6 pm.  The Case of Sheep dip came up some of the members took theirs. 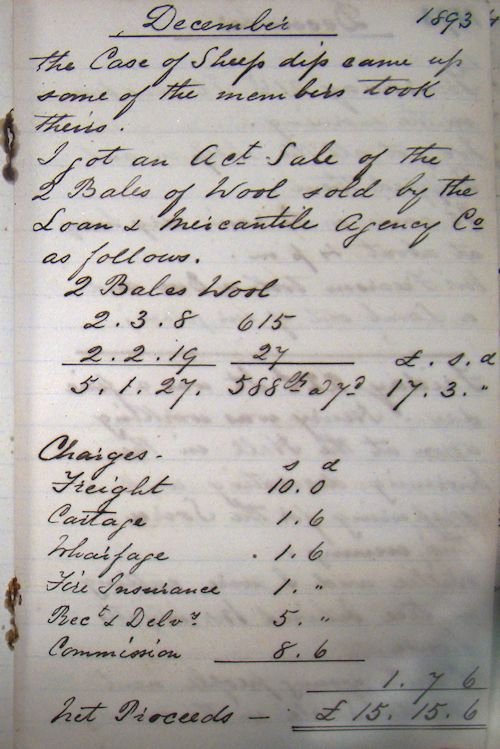 Thursday 21st   It was fine in the morning.  We got all the Sheep in and Dipped them.  It came on to rain very heavy at about 4 pm.
Mr Frearson took a Ewe and a Lamb out of our place.

Friday 22nd   It was a fine day.  Henry was working down at the Hall in the morning, decorating and preparing for the Soiree this evening.  Willie and I were cutting ti tree behind Mr Wyatts house.  All the young people went to the Soiree in the evening.

Saturday 23rd   It was a very hot day.  Willie and Henry were cutting ti tree.  I was cutting Rib Grass Seed bundling it up and bringing it into the shed.  Mr H. Rayner & Fred Pratt brought some Beef over and staid for tea.

Sunday 24th   It was very showery, Clara and Fred Savage were here for tea.  The Services have been altered to the evening, commencing at 7 pm.  On account of the muddy roads there was not a very good congregation, the moon did not give much light coming home as it was cloudy.

Monday 25th   Xmas Day.   It was showery in the morning but fine in the afternoon.  Ernest, Mabel and Albert Wyatt came here to spend the day as their Father and Mother are in Auckland spending their Christmas.

Tuesday 26th   It was a fine day.  There was a Cricket match at Matakana between Omaha & Matakana Clubs.  Henry went over to it.  There was a Picnic down at the beach in the afternoon we all went to it and a Dance in the Hall in the evening.  Geo Hedger was here for dinner.

Wednesday 27th   It was a fine day.  Henry and I were cutting ti tree on the flat near the Sheep Pen.
Tom Pratt & G. Hedger were here for dinner.
The Steamer came in at 1 pm several passengers came up in her.  Minnie & Eunice Pratt are staying here.

Thursday 28th   It was a fine morning but rather dull.  I walked up to Mr Handbys in the morning where I had dinner, he and I went to Pakiri taking it in turns to ride his horse.  We called in at Wrights  I also called at Harpers and then went to the cricket field where a match was being played between Omaha and Te Arai clubs.  Omaha won in one innings and over 50 to spare.
It came on showery in the pm, there was a Soiree in the Hall in the evening, there were not so many as there would have been had the weather been finer.  The concert was very good.  I went home with Mr & Mrs Witten  and staid all night, it rained very heavy just after we got into the house.

Friday 29th   It was very showery all morning.  I left the Wittens at 3.30 pm and walked home arriving at 5.30 wet through as it came on a driving rain before I came to Kempts and kept on until I reached home.  Henry and Willie had got the Sheep up in the afternoon and were killing one when I got home.

Sunday 31st   It was a fine day.  I read service in the Hall in the evening, there was a very fair congregation.  Mr Pratt and
Mr S. Jackson came in the afternoon and staid for tea.