Tuesday 1st    I made another case in the morning, we packed the two cases and John took them down to the beach.
We finished mending up the Matheson fence in the morning.  In the afternoon we burned off some tea tree on the farm.

Wednesday 2nd  We got the sheep up from the beach in the morning.  William Brown came to buy some sheep to take to the Little Barrier.  We picked out 20 old ewes which he is going to have for 4/6 each and 10 young ewes at 10/- each.  The boys were hauling for Mirehouse in the afternoon, I was logging up over in the clearing.

Thursday 3rd  William Brown came up and we helped him take the sheep he bought down to the wharf, we then got the old ram and Willie bought it for 10/- , I gave him an old ewe in, so that he took away 32 Sheep in all.  We were logging up in the clearing in the afternoon.

Friday 4th  We were logging up in the clearing in the morning.  In the afternoon we picked all the Quinces from the two trees in the orchard, we got the clothes basket full.  Afterwards we cleaned out the Fowl house and John lime washed the sides and roof, Henry and I cleared up all the manure in the pigs paddock and put it on the heap, we killed a large wether Sheep that we got from the beach it weighed 72½ lbs.
Mr & Mrs Walter came spent the evening, there was a meeting of the School Committee at the School in the evening.

Saturday 5th   This is the 25th anniversary of my leaving Graveshend for New Zealand.
We were working at the fence near the bridge in the morning.  In the afternoon was the Annual Meeting of Ratepayers, but as the books had not come from the Public Auditor the meeting lapsed.

Monday 7th  We were sowing grass seed near the Lagoon on the farm & raking it in in the morning & afternoon.  Arthur Larkins came in the morning and staid for dinner.

Tuesday 8th   In the morning we finished sowing & raking in the grass seed near the Lagoon.  In the Afternoon we picked a case of Lemons (15 Doz) and the boys hauled them down to the wharf.  Mr Birdsall came and staid for tea,  we went down to the Wharf together to meet the Steamer,  Mr Kirkbride came up by her, and came up to my place to stay.  The Steamer went out same evening.

Wednesday 9th  Mr Kirkbride went all round the lower part of the settlement to visit the people and returned here in the evening.  We were sowing grass seed in the morning on the flat near Matheson’s paddock.  In the afternoon we were burning on the hill.
Mr & Mrs Walter came for tea and spent the evening.

Thursday 10th  Mr Kirkbride left here and made his way up the hill,  It had been raining during the night and we had several showers during the fore-noon, but in the afternoon it poured with rain, we put some pickets in the fence up at the School in the morning, but it was too wet in the afternoon to move out of doors.
Wrote some letters in the evening to Messrs Percival, Bilkey, Sinclair & Tiplady, making enquiries about some young pigs.

Friday 11th  It was very showery all day, we put in all the pickets that we had split and stapled them, in the morning.  In the afternoon we split some Matai pickets on the hill.  It poured with rain so much in the evening that I was unable to go to the Library to change my book.

Saturday 12th  It was very wet in the morning, was not able to do anything out of doors.  The weather cleared up in the afternoon.  I finished sharpening the pickets we split on the hill yesterday afternoon.  I had a walk round the farm afterwards, there was a good fresh in the creek, the quantity of rain we have had ought to kill the crickets, and make the grass grow.
Received a Catalogue of Trees from Mr Edward Morrison.  Commenced to write a letter to Fanny in the evening.

Sunday 13th  It was raining during the night and this morning, but it cleared up about 10 oclock and the sun began to shine, but the roads did not dry up much, as there was no wind,  I went down to John Wyatt’s in the morning but returned home for dinner.  Charlie came in the afternoon and staid for tea.
Revd M Kirkbride conducted service in the Hall in the evening, there were about 60 present and the collection 14/6.  Mr Kirkbride staid the night at Mrs D. Matheson’s.  It was very dark to walk home, no moon.

Monday 14th  We were putting in pickets & stapling them in the morning & afternoon.  It was a fine day but as there was no wind the ground did not dry up much.
maud & John went to Mr Walters to spend the evening.

Tuesday 15th  We were stapleling pickets in the morning.  In the afternoon we were chipping up on the hill.

Wednesday 16th  The boys were hauling for Tom Wyatt and Mirehouse.  I was digging up and burning on the hill.  Mr Roderick Matheson came and spent the evening.

Thursday 17th   We were digging and burning and sowing grass seed on the hill.  It came on to rain in the evening.

Friday 18th  It was very showery all day, we were working at the fence in the morning & afternoon.  Went up to the Library in the evening there was to have been a meeting of the School Committee, but as it was so wet, there was no one there.

Saturday 19th  It was very wet in the morning, we could not do anything out of doors, but we made some wire staples up in the work shop.  It cleared up in the afternoon.

Sunday 20th  Minnies birthday, she is 12 years of age.  It was a fine day, the wind has changed to the SW and the weather seems more settled.  Mr Moor (Wesleyan) preached in the Hall in the morning.  I went up to Mr Jo Greenwood’s had tea there & spent the evening.

Monday 21st  Wind still at SW, a few showers in the afternoon.  John Wyatt came in the morning and we killed the Pig, it does not seem very fat. 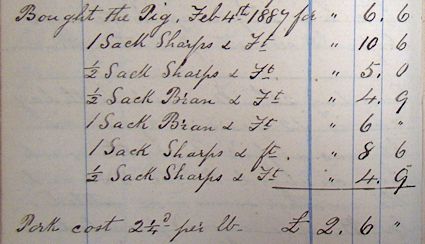 We went over to the fence in the afternoon, drove in some pickets and stapled them.  Wind SW, squally with several showers of rain.
I went down to the Steamer in the evening.

Wednesday 23rd  The boys hauled goods for Joe Wyatt & Mirehouse .  I was busy salting the hams & bacon and preparing the head & feet for brawn.   Cleaned out the pig stye & calves place in the afternoon.  Wrote a letter to Mr Runciman in the evening asking him to call at Arthurs and get some money for Fruit Sold and to pay some accounts.

Thursday 24th  In the morning the boys hauled some goods for Mrs Dunning.
In the afternoon we dug up some ground on the far side of the orchard, to plant with turnips

Friday 25th We dug up some ground below the house where the Vegetable marrows were growing and we commenced to plant Strawberry plants.  There was a meeting of the School Committee in the evening.

Saturday 26th  Henry went to Pratt’s in the morning.  We commenced to plant strawberries in the morning, but it soon came on to the rain, and it was showery all day.
There was an election in the morning to take the Local Option Vote.

Sunday 27th   Trinity Sunday.  Revd R. McKinney preached in the morning. Sarah Greenwood came for dinner. I read service in the afternoon, there was a very small congregation.  Alex Haskell, Duncan Matheson & Walter Wyatt came for .  Henry came home & Willie P. with him.
The sun was very hot in the middle of the day, we had a few showers.

Monday 28th   The weather very unsettled and squally.
We were clearing up on the hill in the morning, in the afternoon we planted some strawberries, but we had to take shelter several times on account of the rain.
Wrote to Earle Montgomery and also to Mrs Moat in the evening.

Tuesday 29th  We hauled a lot of firewood from the hill in the morning.  In the afternoon we planted strawberry plants.  We have finished now, we have 10 rows planted containing 355 plants.  I called at Mrs Fordham’s in the evening and also went down to the steamer she came in very early.  I had a book of sermons sent from the Diosesan  Office also received a letter from Mr J. Sinclair of Lake Takapuna about the Pigs.
Wrote a letter to the Board of Education, also one to Mr Wm Percival, ordering 2 young Sow Pigs.

Wednesday 30th  It was a very fine day, and the ground has dried up very much.  We took in all the Kumakuma’s and put them in the store.  We sowed Oats next to the Strawberries and dug them in.  In the afternoon we commenced sowing Oats next to  the Quince tree  in the orchard & digging them in, the ground works very well, we emptied the fowl manure on this ground and are spreading it and digging it in with the Oats, this ground was planted with Negro Beans this season planted in manured drills.  John Wyatt came in the afternoon & staid for tea.