Charles Septimus Clarke probably started writing his diaries in his late teens when he commenced work as a cadet on the farm of Mr Edward Wortley in the village of Ridlington, parish of Uppingham in Leicestershire. The diary for the first year on the farm, in 1861, is missing but we can speculate that the original reason for him starting the diary was to record the day to day activities on the farm, the farming techniques employed, prices realised, crop rotation etc, in much the same way a student keeps lecture notes of his studies.

He wrote his diaries in hard covered notebooks measuring about 8 x 5½ inches.    Mostly the writing is clear and precise in a slanted flowing style which could be described as copper plate, but occasionally the words becomes difficult to interpret due to  blotches from the reverse side of the sheet and a very small amount of physical damage to the paper.   In an attempt to determine the most probable pen type Clarke used, I submitted three diary samples to a hand writing expert for analysis and comment.  He replied as follows:

“I think I can tell you some rudimentary things about the writing samples you’ve sent through.   The oldest one (IMG 0047) is undoubtedly written with a good quality dip pen – this is clear from the way the ink consistency slowly fades after every few words, until the writer dips it in ink again.  It was probably a steel nib, if for no other reason than England (Birmingham) was the world centre for steel pen nibs by the middle of the nineteenth century, and these had pretty well completely replaced the older quill pens by then.

The second image (IMG 0143) is also clearly a dip pen, but not the same one as the earlier sample. The earlier one has some italic qualities ( ‘thick and thin’ strokes), while this is very hard to see in this image.  Mind you, paper and ink quality could have a fair bit to do with it, as well as the wear and tear of the nib itself.  The nib for this second image might have spread a little with wear – this would account for the heavier (thicker) strokes and the more frequent dips needed to write.
The third image (IMG 1665) is harder to pin down.  If it wasn’t for the date (1895) I would have said it could have been written with a fountain pen, but fountain pens were in their very early stages of development at this time, and frankly they didn’t write very well at all.

So it’s likely that this too was written with a steel dip pen, maybe with a nib reservoir which meant less frequent dips in the ink, and with good quality ink on good paper”.

Clarkes writing style, surprisingly, does not change significantly throughout his life, but there are many alterations to the formation of some letters, such as the ‘t’  and ‘r’. 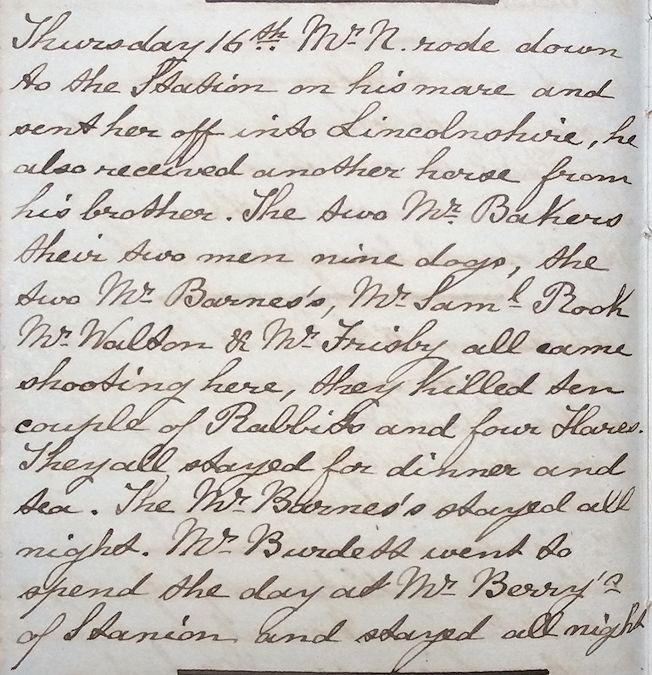 Clarkes writing style in January 1862 when he was aged 19. 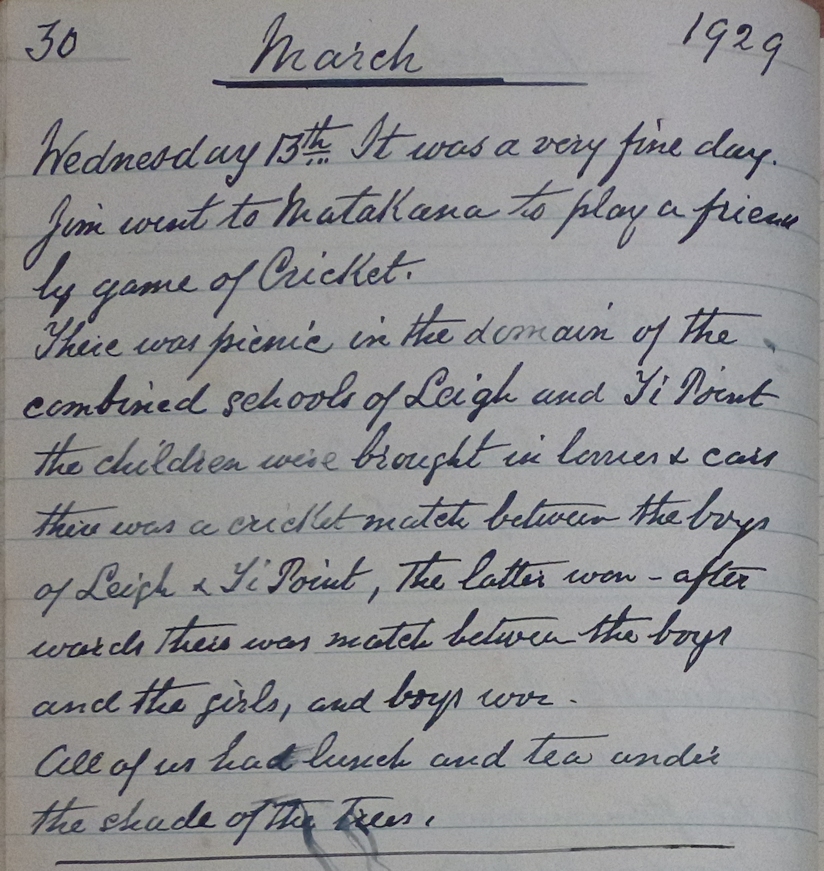 I have attempted to transcribe Charles Clarke’s diaries as they appear in his journals,  reproducing its spelling, but occasionally altering his punctuation to improve the readability of his daily entries.

Occasionally Clarke pens a word which contains a scripting error,
(eg he might write ‘cabage’ meaning ‘cabbage’) and if he had previously and repeatedly spelt the word correctly,  then I have made the correction.  Towards the later parts of the diary in the 1920s he frequently omits one or more letters from the ends of common words he has been writing, these omissions I have also corrected.

Clarke’s spelling of some words changes over the course of many years.  For example in England he spells ‘peas’ as ‘pease’, but after a few years in New Zealand it evolves to ‘peas’ (though he does occasionally revert to the earlier spelling).    The word ‘stayed’ is consistently written as ‘staid’ in the majority of the volumes  (as in ‘Mr Wyatt staid all afternoon’),   but later, in the 1920s the more modern spelling creeps in.    The spelling of maori words sometimes starts off phonetically and later he corrects it when, presumably, he learns of the correct spelling from published documents like newspapers.

Some words or phrases that seem obscure I have tried to provided an explanation by means of a mouse rollover which works like this.
Clarke sometimes lapses into abbreviations, for example a single capital letter to indicate the name of a person he wrote about in a previous sentence.

Name abbreviations
Clarke often writes given names in an abbreviated manner where he superscripts and underlines the second part of the abbreviated name.   I have followed suit, so that

Capitalisation within sentences
Charles Clarke received his formal education in England from an age of 12 to 16 and then spent a year in France where he learnt French and possibly another language.   At that time, in the middle 19th century, it seemed that capitalisation of important nouns inside sentences was still required and maybe practised more in France than in England.   Clarke having been taught in this manner capitalised not only proper nouns but also important nouns,  titles, forms of address and personified nouns.   Over the years of his diary writing he gradually adopted a more modern style and dropped capitalisation of important nouns and by the turn of the century he had became rather inconsistent.  In my transcribing I have faithfully copied his capitalisations.
The following extract shows his capitalisation when he writes of planting vegetable seeds and plants. 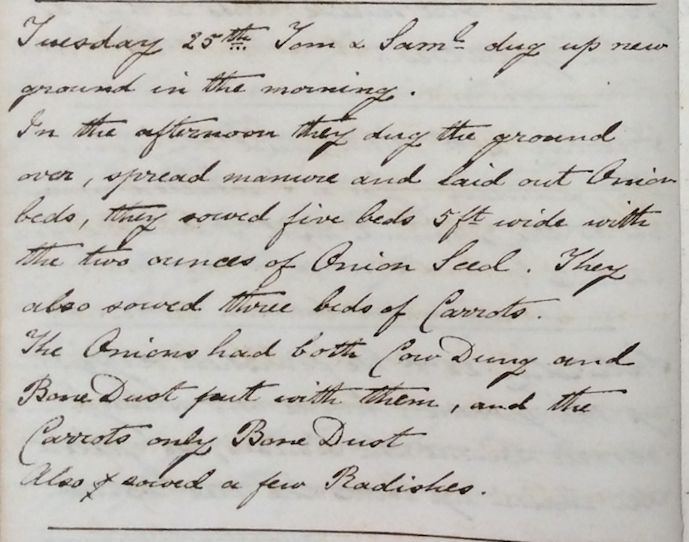 Where appropriate I have used ‘sic’ to emphasise the exact manner in which Clarke wrote the word or phrase and added my interpretation after a colon.  Eg  “a horse having rowled   [sic: rolled]  on him”.