Sunday 1st   Mr Runciman drove out to Otahuhu to preach and took Kenzie with him.  I went to St Sepulchre’s Church in the morning & remained sacrament.  Walked out to Parnell to where Maggie is living & walked back with her.  Went to the Hospital to see Graham.  Went to Mr Fletchers, staid for tea and went with him to Epiphany Church in the evening.

Monday 2nd   Went down town and finished all my business.

Tuesday 3rd   Returned to Omaha by the “Rose Casey” arriving at Omaha at 6.30.  Heard of Mr Wright’s death which occurred to day.

Wednesday 4th   Maud & I rode over to Pakiri to Mr Wright’s funeral, I read the funeral service, and we sang hymn 289, there were a large number present.

Thursday 5th   During my absence in Auckland the boys had harrowed the ploughed ground at top of the hill and had sown Rye Grass seed.  They were raking it in to day and breaking the lumps.
I was making Cases in the shed.  Mr Walter came for tea.

Friday 6th   The boys finished raking in the grass seed on the hill, and they dug up some ground in the garden for two Onion beds.
There was a dance at Dacre’s Claim in aid of the Church, Maud and Henry went.  Willie P. returned with them & staid here.

Saturday 7th   The boys sawed up some Kaihakatea logs & I split some palings.  I made Cases in the afternoon.

Sunday 8th   It was a fine day.  I read service in the Hall in the afternoon, there was a pretty fair congregation.

Monday 9th   The boys cut all the corn stalks in the pigs paddock and picked all the Maize in.  They formed the Onion beds in the afternoon.  I made Cases.
The Sow farrowed in the evening.
Sows     5
Boars   5
Total     10
Maud spent the afternoon and evening at Mrs Fordhams.

Tuesday 10th   It was a wet day.  The boys went shooting.  The girls did not go to school.
I wrote a letter to my brother Tom, sent him two papers, ditto brother John, also wrote a letter to Mr Haseldon and sent them down to Leigh P.O to go by steamer tomorrow.

Wednesday 11th   The boys hauled a box up for Mr Walter in the morning.  Split palings and mad cases.

Thursday Friday & Saturday 12th, 13th & 14th   Weather very dull and wintery.  We employed ourselves in sawing off blocks of the Kaihakatea tree splitting them into billets, splitting palings & making cases.

Sunday 15th   It was fine in the morning, but came on to rain in the afternoon and evening.  There was no service to day.  Alfred Wyatt came up in the afternoon so say that John Salt wanted henry to go and work for him again, so Henry went over to Pakiri on his horse in the pm with Charlie & Robert.

Monday 16th  It was a fine day.  John & I worked at the Kaihakatea. Mrs Eyre & children & Clara Fordham came in the afternoon and staid for tea. 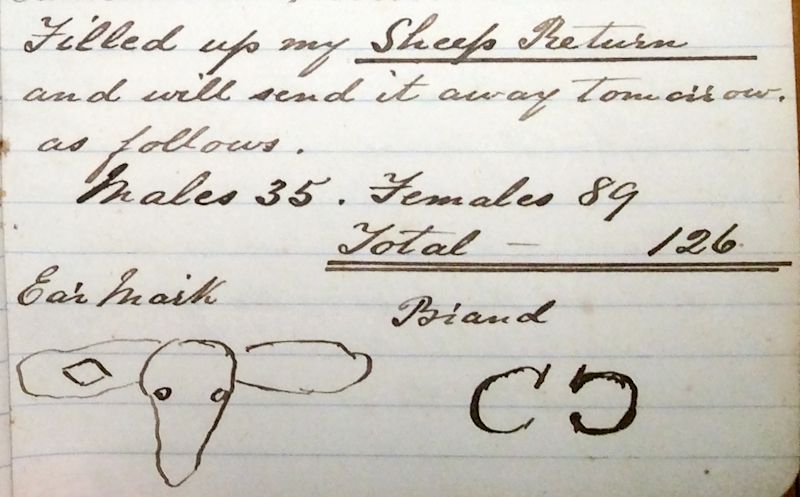 Thursday 19th   It was a fine day.  We mended up some fences.  Split palings in the afternoon.

Friday 20th  Finished mending the orchard fence in the morning.  John commence to fall bush at the Koeroa creek.  I split palings.  We cleaned the pigs in the afternoon.  I went up to Mr Walters in the evening.  I also went to the Library.

Saturday 21st   John cut bush in the morning.  I split palings.  The wind was blowing strong from E.  Henry came home from Pakiri in the evening & Willie came and staid over the Sunday.

Sunday 22nd   The wind still blowing strong from the E.  Mr Boon preached in the Hall in the morning.  I read service in the afternoon.  20 present.

Monday 23rd   Wind still blowing E.  The winter holidays commenced to day.  John, the girls & I were pulling up the short tea tree in the clearing  in the morning.  John was felling bush in the afternoon.  I was splitting palings.  I heard today that Charlie Bond died yesterday morning , and is to be buried tomorrow.

Tuesday 24th   John took the bullocks down to the beach and helped John Wyatt load the barge.  I rode over to Mr Ashtons in the morning, had dinner there, and afterwards rode with him to Matakana to attend Charlie Bond’s funeral.  There were a large number present, Revd R. McKinney officiated.  It came on to rain and I got wet through, it poured with rain all night.

Wednesday 25th   The Steamer came in this morning.  John hauled up some goods for Jackson and C. A. W.  Also Mr Hasledon’s magic lantern and put it into the Hall.
I was making Cases in the shed.  The ground is saturated with water on account of the quantity of rain that fell last night.

Thursday 26th   John, the girls & I were pulling up tea tree on the farm in the morning.  In the pm John fell bush.  I made Cases.

Friday 27th   We went down on to the farm in the morning to pull up tea tree, but it came on to rain so we had to come home again.  I was working in the shed.  Revd J. Haseldon came in the pm, he and I went down to the Hall to get it ready for his Lecture , he returned to our house for tea, we all went down to the Hall in the evening to hear the Lecture on the History of Christianity in England illustrated by magic lantern slides, it was very interesting & was well patronised.  There was £2.0.6 taken at the door.  Henry returned from Pakiri.

Saturday 28th      It was a fine day.  Mr Hasledon gave another Lecture in the Hall in the evening on the History of the Anglican Church in Dioces of Auckland.  The Lecture was very interesting, but was not so well patronised as the one last night.   £1.15.6 was taken at the door.  After paying expenses £1.15.0 was handed over to our Library.

Sunday 29th   Mr Haseldon went to Pakiri to have service in the afternoon, but it came on to rain and there was no service.  There was also no service in the Hall in the evening, but we had service in our house, there was Mr Walter, Mr & Bowden Birdsall here, & they staid for supper.

Monday 30th   It rained all day.  Henry & Willie did not return to Pakiri.  Mr Haselden left in the morning to catch the Steamer at Warkworth.