Clarke apparently did not enter any diary entries from Sunday 11th August to Friday 3rd October and his daily entries continue from page 160.  However his first entry heading of  ‘Saturday 4th’ is actually the 5th of October.  He corrects his mistake when he gets to ‘Tuesday the 8th’.

Saturday 4th  (actually the 5th)  It was very showery in the morning, but it cleared up in the afternoon and the ground began to dry up.  We killed the bull stag that I bought of Mrs Duncan Matheson for £6.  We killed and dressed it early in the morning and cut it up and salted it down in casks in the afternoon, he weighed 648 lbs.
The weather has been so very unsettled lately that we have been unable to get on to the ground to put the crops.  We have been falling bush during this wet weather where I am intending having my house,  we only have a few more tree to fall and then we shall have about two acres chopped down.

Sunday 5th  (actually the 6th)  It was a very fine day.  We had a swam of bees today.  It is the first swarm we have had this season.

Monday 6th  (actually the 7th)  We finished felling the bush where I am thinking of having my house, I think there is almost two acres in the clearing.  Samuel was harrowing in the fern land, and we all picked up the fern roots into heaps.
Mr Wright came in the morning.
It rained very heavily in the afternoon, during the afternoon while it rained Samuel sowed broadcast on the Wheat, 4 Cwt Coral Island Guano over the whole of it, the Guano at 6/- per Cwt with carriage etc would amount to £1.8.0

Tuesday 8th  Samuel finished harrowing in the field, we were all picking up fern root.  Mr Witten came in the morning and staid for dinner.  Harry & Charlie Dyer came over and took Samuel‘s bull to Pakiri.  It was a very fine day.

Wednesday 9th  We all continued picking up fern root in the paddock, it is a very tedious job, but one that has to be done.  I went to Mrs Anderson’s & Mrs Kirkbride’s in the afternoon.

Thursday 10th  We got the bullocks up early in the morning and began ploughing in potatoes in every third furrow with a small sprinkling of Bone Dust in the furrow where the potatoes were planted.  Sid & Joe Anderson came to pick fern root.
In the afternoon we noticed some strange cattle on John Kemp’s land, they turned out to be my Red Rover,  Alice & Cherry, we got them inside the fence, they are in very good condition, Cherry seems to have had a calf, but she has not one with her now; but perhaps it has got strangled in supplejacks.

Friday 11th  It rained very heavily last night and early this morning, it was too wet to plough so we weeded the Onion beds and cut seed potatoes.  In the afternoon we yoked up the bullocks and continued ploughing in potatoes.  Sid & Joe Anderson came to pick fern root.

Saturday 12th  It was a very blusterous & windy day, but we had no rain.  Sid & Joe Anderson came to pick fern root.  We continued ploughing in potatoes.

Sunday 13th  It was a fine day.  I went over to Mr Wyatts in the afternoon to have a look round.

Monday 14th  It rained very heavily last night and was very squally today, it was too wet to continue ploughing, we cut seed potatoes and drew up two loads of raupo and put it into the stock yard.  Tom & I planted 13 hills of pumpkins in the orchard between the fruit trees.

Tuesday 15th It was a fine day with the exception of a few showers.  We continued ploughing in potatoes in the field, we planted 23 rows.

Wednesday 16th  It was very showery all day so that we could not continue ploughing.  The cutter “Alarm” came into the harbour through stress of weather.   Mr West came up to see me, he dined here, but the weather was so bad that he could not have a look round,  I walked with him down to McKenzies in the afternoon where I saw Mrs West.

Thursday 17th  The ground was very wet so that we could not plough, there was also several showers during the day.  We picked up fern root and put it into heaps in the field.  In the afternoon we drew some firewood home to the house.

Friday 18th  It was a very fine day.  We continued ploughing in potatoes in the field in the afternoon,  it was rather wet in some places especially on the headland next to the swamp, the bullocks sunk in up to their hocks every time they turned on it.
We had another swarm of bees today which we hived successfully.

Saturday 19th  We continued ploughing in potatoes in the field, the weather kept fine although it looked very thick and hazy.  There was a large ship going to Auckland in the afternoon.

Sunday 20th  It was a showery day.  I staid at home and wrote a long letter to Aunt Anne.  Mr Greenwood came up from Auckland in the cutter “Hero“, he slept here all night.

Monday 21st  I went over to Mrs Kirkbride’s in the morning to ask Mrs Picken if she would post some letters for me  as she is going to Auckland in the “Alarm” which is expected to call in to day.
The ground was too wet to continue ploughing in potatoes so we cleared the garden of weeds and rubbish and put it into the stockyard to make manure, we then ploughed it up.  Mr Wright came in the morning.

Tuesday 22nd It was very blustery and we had several showers. it was too wet to continue ploughing so we slashed down tea tree scrub in front of the house.

Wednesday 23rd  We had no rain today, but it was too wet to plough, so the men went on cutting down tea tree scrub.  In the afternoon Joe & I made a book case in the corner at the foot of my bed.

Thursday 24th  The wind was very strong last night and the greater part of today, there were a few driving showers early this morning.  We continued ploughing in potatoes, we planted 17 rows of potatoes.

Friday 25th  The wind was very strong and blustering.  We finished ploughing in the potatoes in the field, we had not enough seed to plant all the field so we left a piece unplanted next to the Wheat, but we planted 3 rows on the top headland, the bone dust having run out we had to plant some of the potatoes with Coral Island Guano.
The tillage that I have applied to the potatoes which I compute to contain 3 Acres has been;

Saturday 26th  The morning was thick and misty, but it turned out to be a fine day.  Towards the afternoon the wind which had been very high for some time fell and it has now the appearance of settled fine weather.  Samuel ploughed a six yard land between the Wheat & the Potatoes which I am going to sow with Oats, and in the afternoon he harrowed the potatoe ground with the light harrows, but it does not harrow very well, these winds have baked  it up, so that now it wants a heavy shower of rain to make it fall.  Tom & I began to break up ground in the clearing next to the fence on the top side.
I dug some Ashleaf Kidney Potatoes in the orchard in the afternoon for the first time, they turn out very well considering the wet weather we have had lately,  the ground was very wet and they were planted too deep for early potatoes.

Sunday 27th  It was a fine day with the exception of a few showers.  William & I took a walk to Mr Monkhouse’s to borrow a book, Mr Greenwood & Joe were down there fishing from off the rocks, but they had very little sport.

Monday 28th  The weather continues showery.  Tom & Samuel went out in the morning to fetch up Redman, but came home without finding him.  We continued stumping up in the clearing.

Tuesday 29th  Samuel left today, he has been with me a little over 14 months .  It was a fine day, we continued stumping in the clearing and we set fire to two heaps of logs that we had made.

Wednesday 30th  We had several showers of rain during the day.
William commenced harrowing in the clearing on the ground that I had Maize on last year, I am thinking of having Oats on it this year. We continued stumping in the clearing.  We put the black bullock, Red Rover & Alice outside the fence in the afternoon.

There is now a gap of 20½ years in the surviving diaries.   From November 1867 to March 1888  all volumes of Charles Clarke’s diaries are missing.

The period  spans an important part in his life.   In 1868 he extended his existing 80 acre farm by purchasing 3 adjoining 40 acre sections where he had built a large three-gabled house .
In 1869 he married Mary Anne Wyatt.  They had five of their seven children in Omaha before the family moved to live in Grey St,  Auckland,  (later to be renamed Greys Avenue).  We believe this move was made in 1880,  and the family lived there for around four years.  In 1882 their sixth child, Thomas, died aged 8 months and in the following year Mary Anne died 4 months after bearing their last child, William.  Very soon after his wife’s death, Charles Clarke and his 6 surviving children returned to live in Omaha in the house he called ‘Collingwood‘. 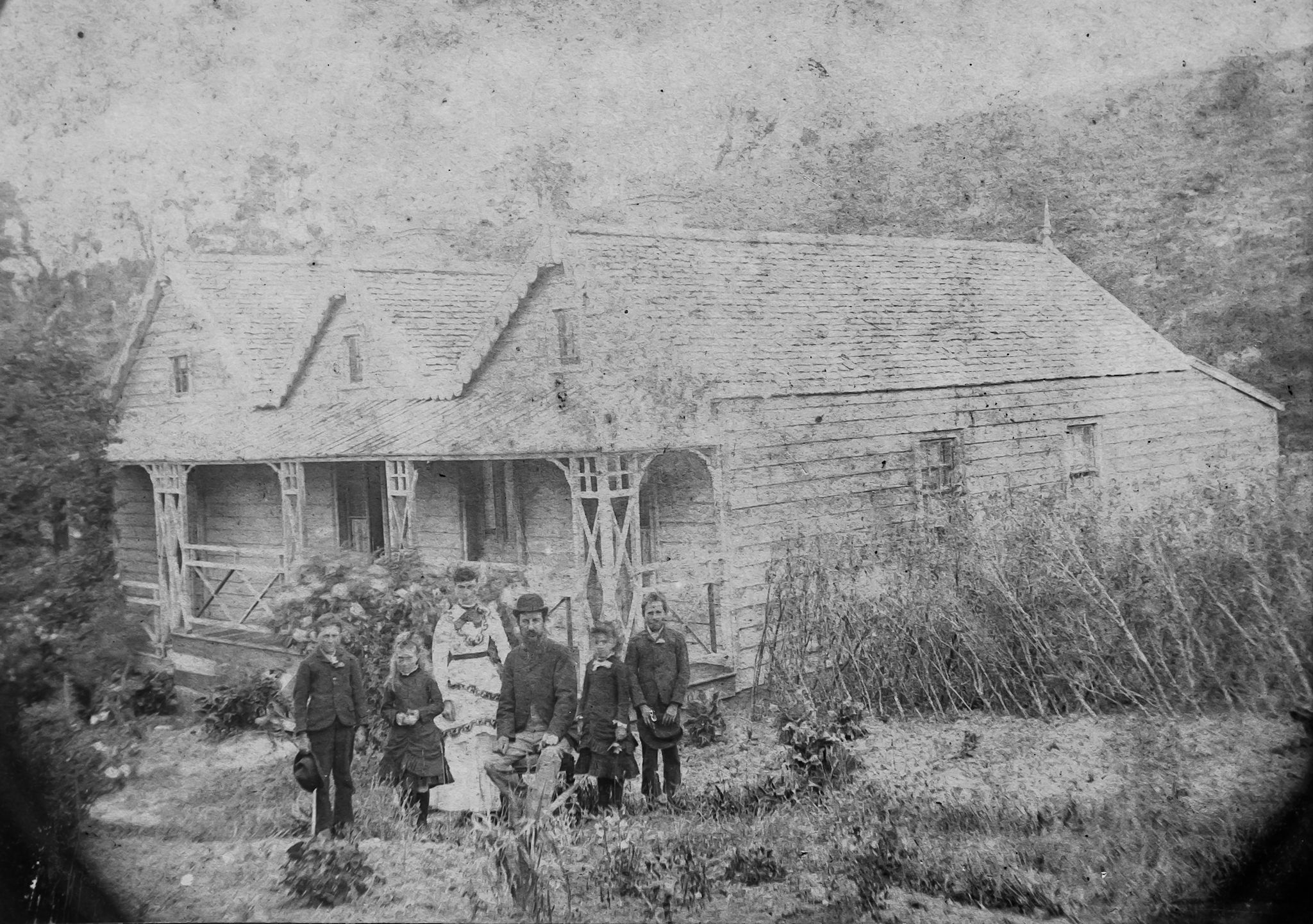 This photo of  Charles Clarke’s house in Leigh was taken, we believe, in about 1885.   We can infer this from the ages of the children who are identified on the reverse of the photo.  The quality of the original photograph from which this one was taken in 2010 is very poor, the contrast being very flat, so that the copying process emphasised the photograph’s imperfections that ordinarily would not be noticed.
Click the image for a magnified view.

On the reverse side of this photograph is written:
“The house of Charles S. Clarke showing L. to R.  John,  Minnie (Mrs J. Torkington),  Maude (Mrs Pratt),  Mr Clarke,  Jane (Mrs Dunning),  Henry.
In this home was the first Store,  first Library,  and first Omaha Show held.
It was the local office of Births, Deaths, and Marriages in Leigh, and Mr Clarke was the first Registrar.
Property of Agnes Matheson”.

The only other photograph of Clarkes house we know of was published in the booklet  “Leigh, Then and Now” from which this image is taken.  The annotation reads “Back view of Mr Charles Septimus Clarke’s house.”