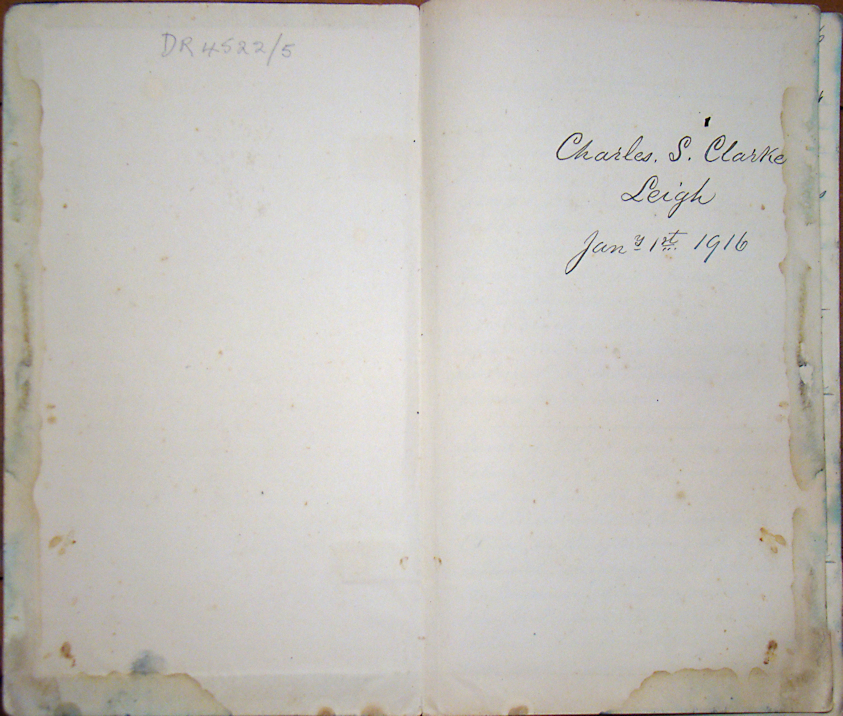 Monday 3rd   It was a very fine day.  All the young people went to a picnic to Lew Meiklejohn’s beach, Jane and Minnie’s families meeting them there.  I staid at home and worked in the garden.  Willie & Dave were thrashing Danthonia.

Tuesday 4th   It was a fine day but very windy and bad for blowing the Danthonia about.  I planted a row of Canadian Wonder beans near the front gate.

Wednesday 5th   It was a very fine day but the wind is still blowing strong from the W which makes it bad for thrashing Danthonia. Willie took the horse down to be shod in the morning, the remainder of the day he thrashed Danthonia.  I went down to the Steamer in the pm.

Thursday 6th   A misty rain when we got up but i turned out a fine day.  George Davey went away by the “Kawau” in the morning, I went to see him off.   Alma W. & Leila returned from Jim’s by the cream cart and they came up here to stay.  There was a dance in the Hall in the evening, the proceeds to go to the Wounded Soldiers’ Fund, all of us went and we spend a very pleasant evening.

Friday 7th   A fine day, blowing again.  Mrs Simpson, Grace and the girls went down to Mrs Dunnings in the afternoon.
I planted another row of Canadian Wonder Beans.

Saturday 8th   It was a very calm fine day.  Alma & Leila returned to Auckland in the “Kawau” which left here at noon, Mrs Simpson, Grace & I went down to the wharf to see them off.   Jane was also over.

Sunday 9th   It was a fine day ‘tho dull. I held service in the Church in the pm.   Congregation 40.   Collection 11/-.
Two motorcars came over from Warkworth.

Monday 10th   It was a fine day. In the afternoon I walked to Ti Point calling at Ashworths to take Mrs A some Zinnia plants.  The “Daphne” brought the boy scouts numbering 76 under Captn Rust.     I had tea at Joes and walked back in the evening calling for the mail Had a ride in Mr Ashworths motor car.  I planted out to day 4 Zinnias and 1 White Verbena.

Tuesday 11th   It was a fine day.  There was a Pic Nic at the Goat Island beach largely attended, Mrs Simpson and Grace went.  Willie was thrashing Danthonia.  I staid at home.   I planted 2 Larkspur and 3 Zinnias.  Went down to the village in the afternoon to post letters, carried up some sand.

Wednesday 12th   It was a very fine day.  Dave did not come to work to day as he is very bad having the symptoms of appendicitis so I was helping Willie thrash Danthonia.  In the dinner hour I went to Ernest Wyatts to get him to Audit the Library Account.  Grace went down to the steamer,  I had a letter from my brother Henry.

Thursday 13th   It was a very fine day.  Willie expected Cyrus Matheson to come and help him thrash Danthonia, but he did not come so I was helping him both morning and afternoon.   Willie carted his butter and eggs down to the wharf and brought up a load of cases.  Dr Jenkins of Warkworth saw Mr Glass and pronounced that he had apendicicus  [sic: appendicitus]   so Wm Dunning took him down to the steamer in his waggon to go to Auckland Hospital to be operated on.
Chas Wyatts boys were carting their Wheat crop into their barn.
In the evening I went down for the mail & attended the Library, the Annual Meeting of Subscribers was held, only five being present. The old Committee was re-elected.

Friday 14th   It was a very fine day. In the morning I got firewood and then carried danthonia and helped him thrash until lunch time.  In the afternoon Grace helped him.  I pricked out in a box the mauve Cornflowers (Jarniaus) also planted 3 Zinnias.

Saturday 15th   It was a very fine day.  Cyrus Matheson & Len Wyatt were helping Willie thrash danthonia.
In the morning I went down for the mail, carried up some sand. Worked in the garden.  In the evening I walked over to the Claim, staid at Jim’s the night.

Sunday 16th   I intended to go to Williams in the Cream Cart, but it was late in coming and Mr Ashworth passed Jim’s slip rails in his motor car and he gave me a ride to Williams gate. I found they were just starting out in their cart for the beach, so I just had a look round the flower garden and they gave me a lift in the cart back to Jim’s again.  I had dinner there and in the afternoon Jim & I went to the Claim Hall, Revd Scott the moderator of the Auckland Presbyterian Church conducted the service, the boy scouts under Captn  Rust attended and filled the Hall, the parson gave a very good address to the boys.
I returned to Jims for tea and afterward I started to walk home when Laurence Whitaker overtook me in a trap and he gave me a ride home.
Mrs Simpson & I attended service in this Hall in the evening.  Revd Scott preached again – a very good sermon.

Monday 17th   It was a very hot day. Willie was thrashing Danthonia.
I was working in the flower garden, I planted a rose pink Ivy Leaved Geranium that Mrs Williams gave me near the lower gate.   Also pricked out the Yellow Cornflowers (Jarniaus) into a shallow box.

Tuesday 18th   It was a very hot day. Willie & Cyse M  [sic: Cyrus Matheson]  were thrashing danthonia.  In the morning I went down for the mail. The remainder of the day I felt very giddy and was not able to do anything.

Wednesday 19th   It was a very hot day.
I was doing a little in the flower garden.   I did not go down to the steamer in the afternoon.

Thursday 20th   It was a very hot day.   Willie & Syse were thrashing danthonia as usual.   In the evening I went down for the mail and attended the Library.

Friday 21st   It was hot in the morning.  I carried danthonia in the morning while Willie was thrashing.
In the afternoon I went down thinking I could get the mail, but the “Kawau” had broken down yesterday and was not going to leave until this evening.
It came over very cloudy late in the afternoon and commenced a misty rain.

Saturday 22nd   It was fine in the morning. After breakfast I went down for the mail.  Willie and Syse were thrashing danthonia, this is the last day Syse is coming.
I was carrying for them all day.
Late in the afternoon it came on a misty rain and they had to Knock off and carry the seed up into the shed.

Sunday 23th   It rained heavily at 3.30 this morning and I had to get up and shut the window and it rained steadily until we got up and continued until the afternoon when it cleared up.   Revd Southern held service in the afternoon but none of us went, I heard afterwards that there were only 8 present.  Revd Scott (Presbyterian) held service in the evening, I attended, he preached a very good service.

Monday 24th   It was a very fine day. The rain we had yesterday has not gone very deep into the ground, but it has freshened all vegetation.
Willie & Grace went fishing and brought home a lot of fish.
I went down to the village in the pm to get the mail, Harold drove Mrs Simpson over from Ti Point, she staid the night.

Tuesday 25th   It was a fine day.   Willie was digging round & manuring the Pumpkins in the farm orchard.  I was working in the flower garden.  I planted out 3 Mauve Cornflowers, 3 Yellow Cornflowers, 4 Zinnias and some Calliopsis Drummundii.
Willie drove Mrs Simpson over to Ti Point in the evening.

Wednesday 26th   It was a showery day.
I was not able to do anything outside in the way of planting, I caught as much rain water as I could and watered some of the plants with liquid manure.
In the afternoon Willie & I went down to the village, but the steamer was so late in arriving that neither of us stopped for the mail.   The wind has been blowing from E for some days and it would be a rough trip to day.

Thursday 27th   The wind still blowing strong from the E.  After breakfast I went down for the mail, worked a little in the flower garden between the showers.
The afternoon & evening were very showery.  I did not go down in the evening for the mail &c.  There was to have been a dance as a send off for George James, who has joined the expeditionary force and is going down to Trentham to be drilled, but on account of the rain it did not come off.

Friday 28th   The wind still blowing strong from the E.    The “Kawau” was to have left Auckland last night at midnight to make a round trip to Mangawai , she should have been in here at 5 am but it was about 8 am when she arrived.   I went down after breakfast to get the two mails, the overland mail that came last night and the one that came this morning, I went down to the wharf, the “Kawau” was lying alongside, she is not going to Mangawai on account of the weather.  A parcel of books came in the mail for the Library, they are what we bought of Revd J. J. Mather, I took them to the Library and catalogued them.
In the afternoon I was working in the flower garden, I commenced to dig the piece of ground that was in Oats.

Saturday 29th    Auckland’s Anniversary and a very unpleasant day.
Wind still blowing strong from the E.    Also a showery day.
I got firewood and dug in the front garden.  Willie was planted mangolds in the farm orchard.
There was to have been a Tennis match this afternoon between Pakiri & Omaha Clubs, but on account of the weather it did not come off, also a dance in the Hall in the evening which was also be a farewell to George James who has joined the expeditionary force and is going down to Trentham to be trained,  so few turned up at the Hall that they were invited down to Mr Archie Dunnings where they spent a very pleasant evening with music and cards.

Monday 31st   It was a fine day. Willie was spraying in this orchard. I was digging the piece of ground that was in Oats.
The young men gave a Social in the Hall as a send off for George James, there was a very nice gathering.  I was the only one from this house who attended.  I was playing 500 all evening, and enjoyed myself very much.