Thursday 1st The weather was very squally we had several showers.
We commenced to plant Pumpkins (Joe Greenwoods sort) on the piece of ground that was in Oats opposite to the other Pumpkins.
We dug manure into the ground.  We got some Sheep up in the evening to get one to kill.
Mr Walter came to spend the evening.

Monday 5th  We were digging in the farm orchard both morning and afternoon.  It was very hot in the morning but came over cloudy in the afternoon.

Tuesday 6th  When we got up there was a dusty rain falling and it seemed as if it had been raining all night, it will do a great deal of good, the wind what little there is of it,  is round to a warmer quarter.   We dug over in the farm orchard.
Wrote to Mr Runciman, asking him to take the children’s money out of the Savings Bank, as they want to buy a horse.
“Daisy” calved today – a bull calf, it is by Charlie Wyatt’s bull, we have called it “Gilbert“.

Wednesday 7th  There was a misty rain nearly all day.  The boys hauled for Mirehouse.  It was too wet to do much on the ground, planted some Cabbage Plants where the Potatoes came out.

Thursday 8th  It rained heavily last night,  and it rained steadily during the morning.  The boys cleaned the calves place out and gathered up all the manure in the pigs paddock.

Friday 9th  We dug in the farm orchard both morning and afternoon. We finished the piece the right hand side of the drain.  Went to the Library in the evening.  It commenced to rain when I was at the Library and was showery all night.

Saturday 10th    We dug in the farm orchard in the morning.  It rained in the afternoon.  I broke up all the bones in the Store.

Sunday 11th  Tom Wyatt came in the morning to have a look round, and staid for dinner.  George Wyatt was also here for dinner.  We had a few Peas and some young Turnips.  Just about Church time it poured down with rain.  There were only 10 present at service.

Monday 12th  It was a fine day.    We dug in the farm orchard both morning and afternoon.  I went to Mr Walters in the evening.

Tuesday 13th  It was a fine day.  We took “May” down to Mathesons bull in the morning  but she was off when we got there.
we also took the bullocks down there and got a load of shell sand.  In the afternoon we resowed the Water Melons as the slugs have eaten them all off.  Also weeded the Parsnips.
The Steamer came in very late about 8.30 pm.

Wednesday 14th  The boys hauled some goods for Joe Wyatt and Mirehouse in the morning.
I’ve sowed the Carrots  at the side of the house.  I stuck the 3rd row of Veitche’s Perfection Peas and we dug between the rows.
The Pakiri Footballers gave a social in the Hall in the evening, there were about 120 present, and we enjoyed a very pleasant evening.
It was showery during the afternoon and it came on pouring with rain about 2 oclock in the morning.

Thursday 15th  The ground was very wet in the morning.  We dug over in the farm orchard in the afternoon.  We got some of the Sheep up in the evening.

Saturday 17th    It came on to rain in the afternoon but cleared up in the evening.

Sunday 18th  It is 4 years to day since we returned to Omaha.
Revd R. McKinney preached in the Hall in the morning to a large congregation.  I read service in the afternoon, but there were only 13 present.  Sarah Greenwood came here for dinner.  Sarah Pratt, who had been staying here since the social, went home after dinner.  Tom met her with a horse on the hill.  Willie P. who came over in the morning had dinner & tea here and went home in the evening.
It was a very fine day.

Monday 19th  We dug in the farm orchard in the morning & part of the afternoon.  After dinner we went up to Mr Neeleys, he was sheering his Sheep – there were two of ours in which we sheared before we took them out, they were a young ewe & a young wether.  Maud went to Mr Walters in the evening.  I wrote to Mr Runciman acknowledging the receipt of the money he took out of the bank for the children.  Also wrote a report of the Social to send to the Weekly News.

Tuesday 20th  We dug in the farm orchard morning and afternoon.
The Steamer came in early – Mrs Walter and Basil came up in her.  Willie Pratt  brought over the mare that Maud & Henry have bought.

Wednesday 21st  The boys hauled for Mirehouse in the morning.  I cleaned the pigs out and gathered some of the manure in the pigs paddock.  The boys mended up the fence round the garden.  I went to Mr Walters for tea.

Thursday 22nd  Weather misty with slight showers during the day, it rained heavier in the evening.  We dug in the farm orchard both morning & afternoon.

Friday 23rd   We dug in the farm orchard in the morning and so did the boys in the afternoon.  I went over to Great Omaha in the afternoon on the new horse to Mr Birdsalls where I met the Revd J. Haselden, we all went to the Hall in the evening where Mr Haselden held service to a very good congregation, they have just purchased a harmonium which was used to night for the first time, Miss Maria Birdsall played it.  After the service a meeting was held to make arrangements for having services held every Sunday.  Mr Brookman was proposed as Lay Reader, which duty he accepted.  Mr Ashton, Mr Birdsall & Mr Brookman were appointed a Church Committee.  Mr Haselden returned to Mr Birdsalls to stay all night.
During the service it had rained very heavily which made the roads very slippery.  Maud who had walked over with Alice Wyatt, calling at Mr Ashtons, rode home on the horse.  I walked with Alice.

Saturday 24th  We finished digging in the farm orchard in the morning.  In the afternoon I stuck the row of Tall Marrow Peas and dug between the rows.  Minnie & Jane went to Mr Walters to celebrate George Walters birthday, they went to the Goat Island Beach and had tea at Mr Walters.

Sunday 25th  In the morning I walked over to Dacres Claim Hall, to attend the first service conducted by Mr Brookman, there was a very good congregation.  I returned to Mr Ashtons for dinner, Mr Bond, Mr Matthew & Miss Came were also there.  Mr Brookman & his son called for us about 3 oclock, and Mr, Mrs & George Ashton walked over with me to our place for tea, Mr Pratt & Willie & Walter Wyatt were also with us for tea.
After tea we went down to the Hall for service Mr Haselden officiated there were about 70 present, the offeratory amounted to 16/6.  There was Communion after the service to which 19 stayed.  Mr Haselden returned to my place and stayed all night, also Mr John Greenwood Senr.  It was very dark coming home.

Monday 26th  Mr Haselden left on his return to Auckland.  The boys took the bullocks to the beach and hauled up a load of sea weed, which we put on the manure heap in the orchard.  I picked up manure in their absence and we covered the sea weed with cow dung.
In the afternoon we cleared out the workshop ready for shearing.
Maud went to Mr Walters and spent the evening there.

Tuesday 27th  We dug out the Convolvulus between the potatoes.
It was a fine day.
The Rose Casey came in early.
Johny Salt & Madelene came up.

Wednesday 28th  Charlie Wyatt came in the morning to shear.  We got some Sheep up and sheared 39 – it was a hot day.  Charlie staid all night.  We killed a Sheep in the evening.

Thursday 29th  It rained during the night and nearly all this morning.  It was too wet to get the Sheep in. Charlie went home.  It cleared up in the afternoon.  The boys sheared some skins.  I planted out some Tomatoes in the afternoon.
We got the sheep up in the evening.

Friday 30th  Charlie Wyatt came first thing in the morning and we commenced the shear early.  It was a fine hot day and we worked hard with the sheep and finished them before dark, shearing 58 of my own 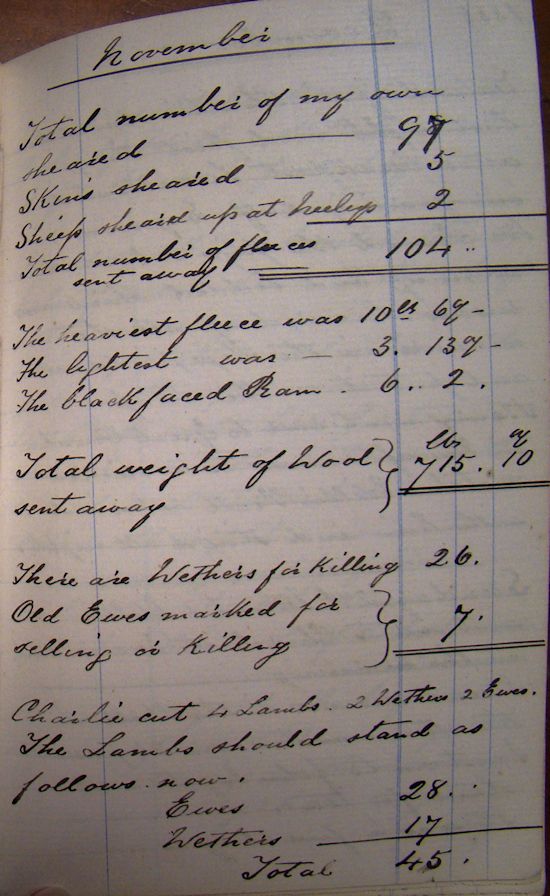