Saturday 1st   It was a very fine day.  Willie was watching his charcoal kiln.  John Greenwood called in the morning, as he heard that the arrangement between me and Eddie Wyatt for the sale of this place had fallen through and that his son Willie would have liked to by  [sic: buy] the place, so of course I told him that the arrangement still held good.
I finished digging the piece of ground the top side of the house & I got firewood.  Mrs Simpson went over to Ti Point.

Sunday 2nd   There was a slight shower in the morning otherwise it was a fine day.  I attended the presbyterian service at 10.30 am.  Revd Poole officiated, but I did not like him a little bit, he told a lot of comic yarns to make people laugh.  Alma Torkington being home for a holiday was at church so I walked home with her & spent the day at Ti Point.

Monday 3rd   There was a slight shower in the morning otherwise it was a fine day.  Mrs Simpson returned from Ti Point & was caught in the shower.  Willie commenced to take out the charcoal.  I got wood.
Eddie & Ivy came to spend the evening.

Tuesday 3rd   It was a fine day, ‘tho dull.  In the morning I went down to the village, but there was no mail for us.  Afterwards I loosened round the Sweet Peas, earthed them up and put small sticks to support them.  In the afternoon I was down at the flat,  Willie continued taking out the charcoal & I sowed up the sacks.

Wednesday 4th   It was a fine day.  Willie was taking out his charcoal, I was helping him in the morning by sewing up sacks.  In the afternoon I went down to the steamer.  Mr Grindrod sent me a large parcel of Daffodil bulbs.

Thursday 5th   It was a fine day.  Willie was bagging up his charcoal. In the morning I was helping him fill sacks and sewing them up.
I came home for lunch and in the afternoon I started to stick the sweet peas when Mr Shanks of Kaupapa came to value my farm for the Government as Eddie Wyatt whom I have sold it to is getting the purchase money from the Government.  Eddie went round with us inspecting the farm.  Mr Shanks staid the night here.

Friday 6th   It was a fine day.  Mr Shanks finished valuing the farm and left after breakfast.  I was sewing up charcoal bags.  Willie finished bagging up the charcoal and sledged 4 loads out to the road.
When I returned to the house I found Minnie and Agnes there, they had come to meet Alma who was expected by the “Kawau” this evening.  I went down with them to meet the steamer  which arrived just before 5 pm, the overland also arrived at 5.15, so I got the two mails,  I also waited until the Library opened and changed my book.

Saturday 7th   It was a fine day.  Jim Wyatt finished ploughing the piece of ground that was in wheat on our place.  I finished sticking the Sweet Peas near the front,  & I dug the ground each side.  Willie finished sledging the charcoal out to the county road.  I rode on Bill over to Jim’s place in the afternoon to spend the week end.   Jean & the baby were very unwell with colds.

Sunday 8th   It was a very fine day.   Jane & I went to call at Birdsalls  in the afternoon, Bowden was the only one at home.

Monday 9th   It rained all last night and most of today, so that I was unable to get home.  Jim went out shooting, but only shot three quails. pheasants are very scarce.  I re-varnished the childs cot for Jane.

Tuesday 10th   It rained last night and when we got up this morning, but later it cleared up & the sun came out, so I started for home, but I had not got far on the road when it set in a misty rain and after I got home it poured with rain.  Willie was carting his charcoal to the wharf  & he finished doing so late in the evening.
After I got home I went down to see Eddie Wyatt to ask if I could board with them when Willie & Grace had gone to Auckland.

Wednesday 12th   It rained nearly all day, it held up a little in the afternoon & I went down to the village after the steamer arrived and got the mail.  Willie carted some Onions & two bags of wheat down to the wharf.

Thursday 13th   It is still keeps raining, but it held up for a while in the afternoon.  Willie went down to the wharf in the afternoon and sent away his charcoal 101 bags by the “Kawau“.  Heard that there had been big slips on the Pakiri road on account of the constant rain.
I did not do any work outside, but remained in my room with a good fire.

Friday 14th   It was a fine day, but the ground is very wet after the four days rain.  Willie took some sacks of wheat down to the sulky shed and young Archie Dunning came up with a wagon and carted them over to the Claim for Jack Walden.  Mr Leech from Welsford, the valuer came in the afternoon, so I took him round the farm, he staid the night here.

Saturday 15th   It was a fine day, but windy.  Mr Leech finished valuing the farm this morning.  Eddie Wyatt came up to have a talk to him, and then he started for home again.
I went down to get the mail, called on Mrs Gravatt and Mrs G. Wyatt.
Revd J. C. Hawkesworth , the new Vicar came here in the evening and staid the night.

Monday 17th   It was a very fine day.  Willie was packing Pears and he carted a load down to the wharf in the afternoon.  In the morning I went down to the village to post letters, called at Gravatts.  In the afternoon I planted 9 clumps of Daffodils that Mr Grindrod sent me.
Mrs Simpson walked to Ti Point

Tuesday 18th   It rained in the morning, but it turned out a fine day.
As it rained heavily last night the ground was too wet to continue planting Daffodils, so I did some washing, in the afternoon I did some weeding in the garden.  Mrs Simpson returned from Ti Point at noon.
Willie was packing Pears & Onions and he carted them down to the wharf in the afternoon.  I went down to Mrs Dunnings in the evening,  we played 500.

Wednesday 19th   It was a showery day.  Willie took Bill down to the blacksmiths to get shod.  Grace was still in bed with a cold.
I packed some daffodil bulbs & plants and took them down to the steamer in the afternoon and gave them to Willie Greenwood to take up to his mother.

Thursday 20th   It was a very showery day.   Mrs Simpson went to Auckland by the “Kawau” which left here at 9.30.  Willie drove her down to the wharf  in the sulky, she will stay at Mr Wallaces at Devonport for a few days and then she is going to Dargaville to her son Fred.  Willie picked in bean seed, onions & pumpkins from the new garden.  I had to be cook.

Friday 21st   It was a fine day, but the ground is very wet.  As Grace was in bed with a cold I had to cook the dinner.  In the afternoon I was planting Daffodils in the diamond bed, I planted about 18 clumps, all that Mr Grindrod sent me and some of my own.  In the evening I went down for the mail.
Kiri Brown died at Rotorua last Wednesday, the body was brought here by the “Kawau” to be buried at the Pa.

Saturday 22nd    It was a showery day.  Raymonds 5th birthday. After breakfast I went down to put flowers in the church, when I heard that Kiri Browns funeral was to be at 2 oclock tomorrow I decided not to have service today.  Called at Gravatts.  I finished planting Daffodils in the diamond bed.

Sunday 23rd    It was a fine day.
Kiri Brown was buried at the Maori Cemetery at the pa at 2 pm,  there was a large attendance of Maoris & Europeans.  Revd Orchard, Methodist, now stationed at Port Albert conducted the funeral service and gave a very touching address at the grave side.  Horrie Ashtons launch took the settlers over to the pa in many trips.

Monday 24th  With the exception of one or two slight showers it was a fine day.  Willie, Grace & Raymond went fishing down to the wharf after breakfast and did not come home until the evening bringing some small fish.  I was planting Daffodils in the border opposite the summer house. 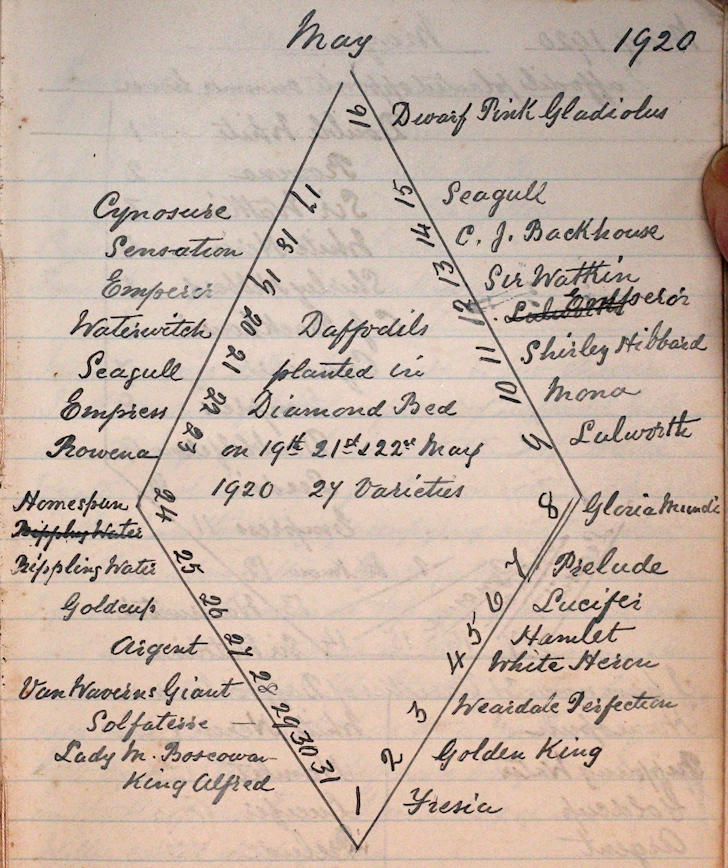 Tuesday 25th   It was a showery day.  I finished planting Daffodils, then I took up the clump of Belladonna Lilies & replanted them.
Also planted a Penstemon & Aquilegia.  In the pm I packed up Daffodils for Ivy & Mrs Heywood.
I received a letter from my son Henry. 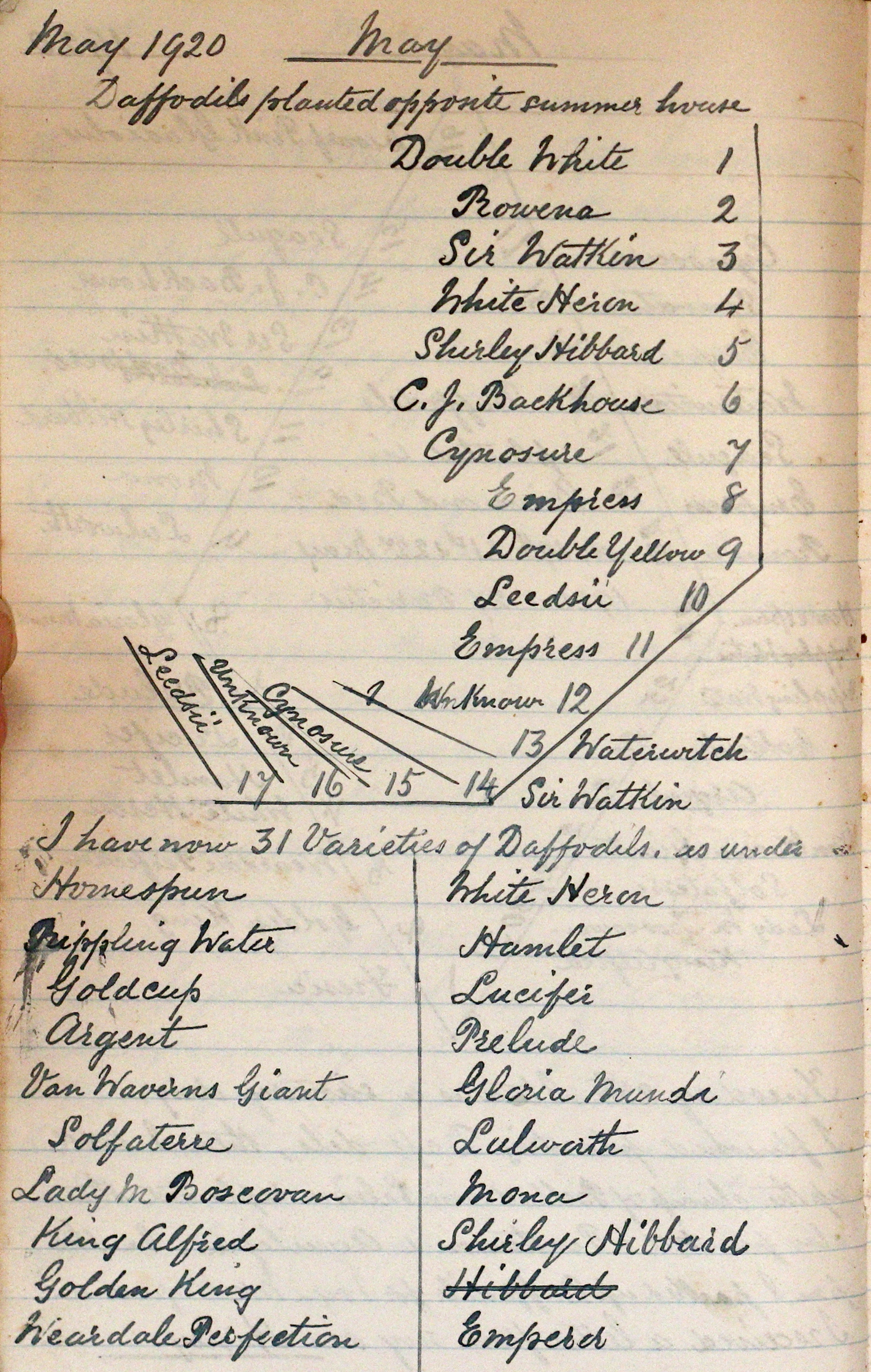 Wednesday 26th   There were a few showers.  In the morning I took a parcel of Daffodil bulbs down to Ivy.  Had a business talk with Eddie Wyatt, he showed me a front room with a fire place in that I am thinking of occupying and boarding with them when Willie & Grace go to Auckland.
I picked some beans in at top side of house for seed,  went down to the steamer in the afternoon  –  she made a return trip.  The Stirlings who have sold their place on the hill to a Mr Rodney left by the Steamer, they have bought a place on the Kaipara line.  I got a bag of sand and Willie carted it up for me.

Friday 28th   It was a very showery day.  I went down to the village before breakfast to post a letter.  Tried to rip up a sapling  [?]  to make a ladder but the showers prevented me finishing it.  I did not go down for the mail in the evening on account of the weather.  There was to have been a concert in the Hall to buy toys for a Xmas tree, but none of us went for same reason.
I wrote a long letter to Jack.

Saturday 29th   After breakfast I went down to get the mail, called in at Dunnings to change Library books with May.   A cold showery day, got firewood, lit a fire in my room and made myself comfortable. Heard at Dunnings that the concert came off last night and was a success.

Sunday 30th   Heavy showers of hail early in the morning, otherwise a fine day.  Willie & Grace drove to Ti Point in the pm.  I went to Horaces place.