Sunday 1st  There were several showers during the day.
Revd E. G. Evans (Presbyterian) held service in the Hall in the morning.  Jane, Minnie & I went.  Joe took Alma and Arthur home, Willie went with him.  Minnie returned with us for dinner and Mrs D. Knaggs called for her in the afternoon and they walked home together.

Monday 2nd   Several showers during the day.  Willie returned from Ti Point bringing with him two saws that Mr Torkington had sharpened for me.  We put in a few posts on the hill.  Jane went down to John Wyatts at the beach to stay while Honor is away in Auckland.

Tuesday 3rd   It was wet in the morning.  Willie went down to the
P. O to post some letters and to get the mail.
The afternoon was fine, Willie and I put in some posts on the hill.
Charlie Whitley came with his new Storeman  (Mr Butters) for me to witness his signature.

Wednesday 4th   It rained last night and early this morning, but it turned out a very fine day.
Jane came up from Uncle Johns to pat up the butter, she went down to the Steamer in in afternoon and up to Uncle Johns, but returned here in the evening to sleep.   In the afternoon I went down to the Library to change some books and to take some eggs to the Store.
Willie and I continued putting in posts.

Thursday 5th   It was a showery day.  Jane staid at home to make bread and she went back to Uncle Johns in the evening.  Willie and I were putting in posts in the new fence.

Friday 6th   It was very showery in the morning, but not so bad in the pm.  In the afternoon I went down to the Hall to trim the lamps as there is to be a Euchre Party this evening , Jane went to it, but Willie & I did not.  Willie walked over to Ti Point in the afternoon returning in the evening.

Saturday 7th   It was a very showery day.  Willie and I put in a few posts on the hill.  I went down to the Library in the afternoon to change a book for Minnie.

Monday 9th   The wind has got round to the SW and it was a very fine day which was a great treat after so much showery weather, and the ground is drying up.
Willie and I were pulling in posts on the hill for the new fence.

Tuesday 10th   A very showery day.   Willie & I were putting in posts.

Wednesday 11th   A showery day.  Jane came home in the morning as Honor Wyatt returned from Auckland in the “Energy” last night.  Jane went down to meet the “Kawau” in the afternoon, she took the Eggs to the Store and got the mail.  Willie and I were working at the new fence at the top of the hill.

Thursday 12th   The weather was very fine during the day, but we had some showers the latter part of the afternoon .  Willie and I were working at the fence on the hill.

Friday 13th   There were a few showers during the day.  In the morning I went down to the Post Office and Store, I got a pair of boots for myself.
We have finished putting in the posts so we commenced putting on wire on a portion of it, we are using up some black wire that was round Henry’s orchard.
Jane went to Joe Wyatts in the pm and then she went down for the mail.  I received a letter from Henry, it is the first received since he returned home.  I also received a pair of slippers that Noel Wallace kindly sent me.

Saturday 14th   It was a showery day.  There was a Football match at Dacres Claim between Mangawai and Omaha, the latter won 15 to nil.  Jane rode over to see it and also stayed for the dance in the evening.  It came on the rain heavily just before dark and continued all evening.  Jane got wet coming home.
I finished putting on the black wire.

Sunday 15th   It was raining nearly all day, Jane and I did not go out anywhere,  Willie walked over to Ti Point and staid all night.

Monday 16th   It was blowing and raining all last night, wind blowing strong from SW, and there is a big sea outside.  It rained nearly all day.  I milked the cows and chopped wood in the fine intervals .
Willie returned from Ti Point in the middle of the day.

Tuesday 17th   It was the finest day we have had for some weeks, no rain fell.  Willie was digging gum.  I was cutting tea tree on the top of the hill, the other side of the new fence we are putting up.  I went down to the Store in the pm to sell the eggs.

Wednesday 18th   It was a very fine day.  Willie walked to Ti Point returning in the evening.
I put in the struts and guys to the straining posts at each end of the new fence on the hill.
Jane went down to the village in the afternoon, there were no steamers, both the “Kawau” and “Energy” are stuck at Mangawai.

Thursday 19th   It was fine in the morning, but there was a misty rain in the afternoon.  Willie and I made a board gate for the new fence on the top of the hill.

Friday 20th   It was a fine day.  Willie took some letters down to the Post Office in the morning.
We took the gate up to the new fence and hung it.  We were tightening the back wires on the fence going from the down to the lane.  In the evening Willie went down to the village to get the mail, but found that the “Kotiti” which had the mail on board got stuck going up to the top wharf so he did not get the Weekly News.
The “Kawau” came in while Willie was down there, she has been in Mangawai ever since last Monday and had to remain there on account of the heavy surf outside, she reports that the vessel nearly went ashore going in last Monday.

Saturday 21st   After breakfast Willie went down to the Post Office and got the Weekly News, the “Kotiti” got off the mud bank last night and came in here after Willie got home last night.  While Willie was down at the village the “Energy” came in from Mangawai, she also has been wind bound there ever since last Sunday.
I was doing odd jobs.
In the evening after dark, Joe, Minnie and the children came over to stay with us.  We had a rubber of whist after tea.

Sunday 22nd   It was a dull day, but only some slight showers fell.  In the morning Joe and Willie went down to the village for a yarn.  After dinner Joe, Minnie & bairns returned home, Willie went with them on “Empress”.  Agnes staid with us and she & Jane went down to Charlie Wyatts in the afternoon & staid tea.

Monday 23rd   It was a showery day.  Willie returned from Ti Point in the morning.  I made a cap for the gate and did other odd jobs.

Tuesday 24th   It was a fine day.  I put the cap on the gate, painted it, also the hinges &c.  Willie took the bullock down to the store and hailed up a Sack of Sharps .

Wednesday 25th   It was a fine day.  Willie went down to the wharf directly after breakfast and found that our goods had been landed by the “Energy” last night, so he got the bullock and went down to the wharf again and hauled up 2 ½ Cwt Reels of Barb Wire,  2½ Coils of Plain Wire and a bag of Beef.
I took the Eggs down to the Store in the am.  We started to put the Wire on the new fence on the hill in the afternoon.

Thursday 26th   There was a pretty long shower of rain in the afternoon, otherwise it was a fine day.
We finished putting the wire on the fence, but we did not finish stapling it.  We had about 6 chain of plain wire over.

Friday 27th   Willie started making a Charcoal Kiln on the hill the other side of the fence.  I went down to the Store in the morning to post some letters and to get the mail.
Afterwards I finished stapling all the wires on the new fence on the hill.  Jane went down for the mail in the evening.

Saturday 28th   It was very showery in the morning, but was fine in the afternoon.  In the afternoon I went down to the wharf to get some grit for the fowls.

Sunday 29th   It was fine in the morning.  Willie rode to Ti Point taking Agnes back with him, he returned home in the evening.
Revd E. G. Evans held service in the Hall in the morning, Jane & I went.  Mr & Mrs Jos Greenwood , Elliot and Dora came up with us for dinner.  It rained heavily all afternoon.  Mr Greenwood and Elliot went home late in the afternoon, but Mrs G and Dora stayed for tea and as it turned out very fine in the evening, they also went home.

Monday 30th  Willie is working at his charcoal.  In the morning a Mr H. Bowers called here, he is selling a preparation for killing all blight on Fruit Trees and also keeps away codlin moth.  I bought some of it sufficient to dress 50 trees.  It has to be painted on to the stem of the trees about 9 inches up from the ground, in the afternoon I dressed the following trees. 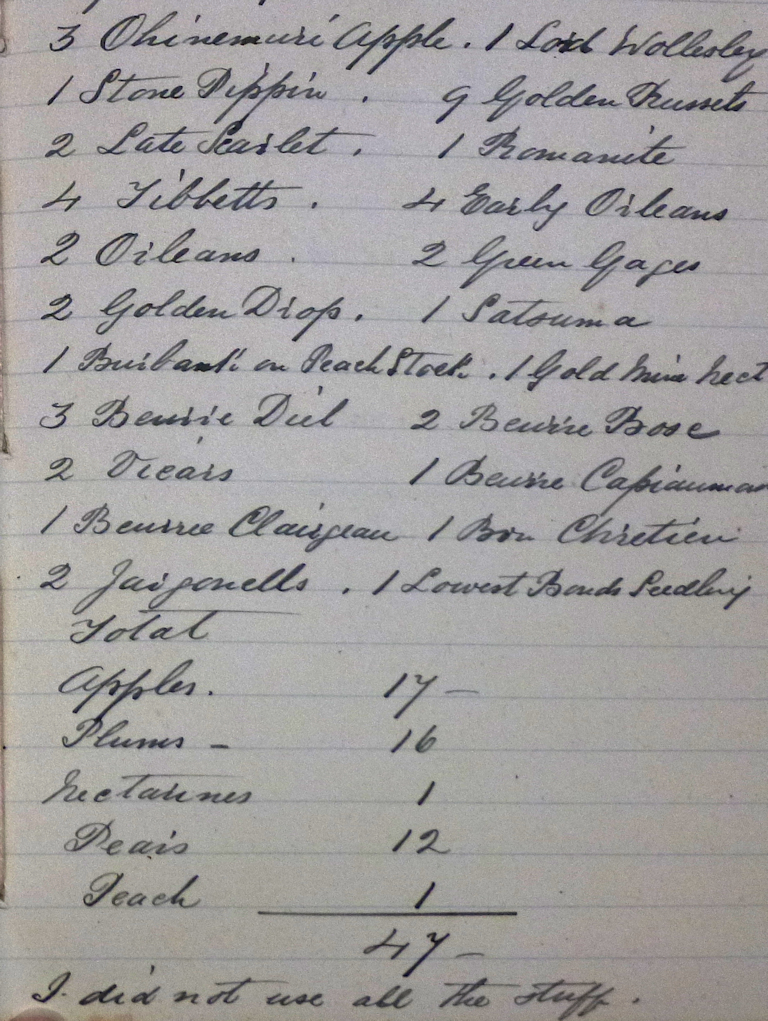 Tuesday 31st   There were a few showers in the morning, but it was fine in the pm.  Jane and Mabel rode up the hill to call on Mrs Arthur Greenwood and Mrs Wilson Knaggs.  The latter was not at home so they went on to see Mrs McKinnon, on the place she bought of me.
Willie was working at the charcoal.  I was making pickets and putting them in.  I went down to the Store in the afternoon with the Eggs.  We saw the First Lamb this season on the hill in the Cow Paddock.