Monday 1st   John went shooting all day.  Henry started harrowing the Pigs Paddock.  I planted out three rows of Cabbages.  It came on to rain in the middle of the day and rained most of the afternoon. Charlie commenced ploughing in the Race Course.

Tuesday 2nd   It blew very hard from the NE.  We were up the hill getting straining posts.  The Steamer did not come.

Wednesday 3rd   It was a wet day. Cleaned out the Pig and made some cases.

Thursday 4th   It was a pretty fine day with the exception of a few showers.  We were working up on the hill squaring straining posts. John Greenwood & Hannah Birdsall were married today by Revd J. Haselden.

Friday 5th It was squally and showery.  We were working the bullocks on the hill hauling out posts. We also sighted out the line for the fence.

Saturday 6th   It was very showery.  We were sawing up firewood on the hill all day.

Sunday 7th   Showery day.  Revd J. Haselden preached at Dacre’s Claim in the morning, he came here for dinner and then held service in the Hall at 3 pm, there were 56 present, 9 received communion and  17/4  was collected,  J. H. returned here and staid all night.

Monday 8th   Revd J. H.  left this morning.  Henry went shooting all day, John & I commenced erecting the fence on the hill.  It was very windy, but there was not so much rain.  Alex Haskell was here for tea.

Tuesday 9th   We packed 2 Cases Apples & 1 Sack Onions and John took them down to the wharf with his horse.  We continued putting in the fencing posts on the hill.  The Steamer came in early.

Wednesday 10th   Henry hauled 3 bags of flour from the Wharf for us, also hauled goods for Harper & Dunning.  We continued putting in fencing posts on the hill. 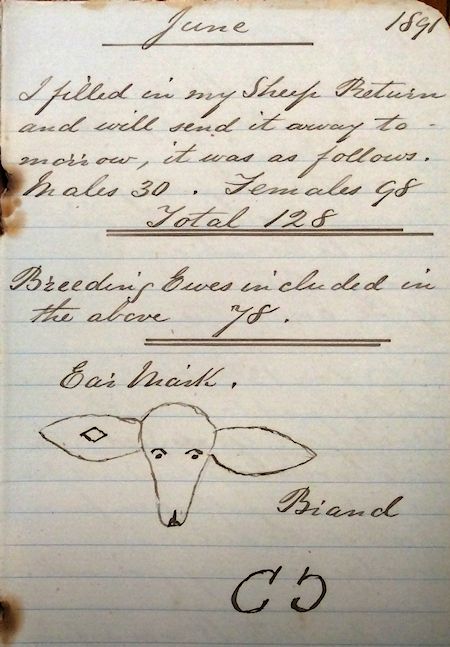 Friday 12th   Henry was harrowing the Pigs paddock in the morning. We continued putting in fencing posts on the hill.  I went to the Library in the evening, there was a meeting of the committee.

Saturday 13th   Henry sowed the Pigs paddock with Cocksfoot Grass Seed, the girls knocked the lumps with hoes, we continued putting in fencing posts on the hill.  This has been a very fine week.

Monday 15th   It was a fine day.  John went shooting all day.  Henry & I were putting in posts on the hill.  We got the Sheep up in the evening.

Tuesday 16th   We were cleaning the Sheep in the morning, we counted 117, but there are a good many in Neeleys.  We were putting in posts in pm. The Steamer came in and went in the evening.

Thursday 18th   Fine weather. Put in a large straining post near the School reserve.  Sawed and rolled out of the line of fence the Totara tree and put in the two posts.

Friday 19th   Fine weather.  John & Henry took up five head of our young cattle on to our land on the hill, they went shooting afterwards & brought home 4 pigeons and 2 Kakas.  I was working up on the hill boring posts etc.

Saturday 20th   Fine weather.  Henry was working in his place planting Lemon Trees.  John & I were working on the hill putting in 2 Straining Posts at the angle.

Sunday 21st   Misty in the morning but it turned out a fine day.  Read service in the afternoon, there were not many there.  Willie P.  spent the day here.  Henry went to Pakiri in the afternoon, he is going to commence to work for Ellis Dyer tomorrow for 10/- per week.

Monday 22nd   Weather cloudy with a few showers.  We were working on the hill putting in struts to the straining posts.

Tuesday 23rd   A fine day.  John went and got 20 lb staples from
G. Knaggs, & he sharpened the hand saw , we put the last strut to a straining post up on the hill.  There was a dance in the Hall in the evening to raise some money in aid of the Library.  Willie Pratt came over and brought us 54 lbs Beef.

Wednesday 24th   A fine day.  John hauled up a sack of Sharps and the Wire that came for us by the Steamer last night.
We commenced putting the wire on the fence . Mr Walter & Miss Hills came and spent the evening.

Thursday 25th   A very windy day.  Maude & Alice Wyatt went to Pakiri.  We were putting on the Wire.  Mrs D. Matheson came in the evening.

Friday 26th   A very windy day with a few showers.  John was hauling some posts. I was putting on wire etc.

Saturday 27th   A very windy day.  We were putting wire on the fence both morning & afternoon.  Henry returned from Pakiri.
Willie P. also came and staid all night.

Tuesday 30th   A windy day.  We packed 2 Cases Apples and John took them down to the Wharf with his horse.  In the afternoon we went up the hill to finish putting on the wire, but there was so much wind we had to leave it, so we pulled up ti tree with the girls.