Tuesday 1st   It was a fine day.  In the morning I went across to town, did some shopping & returned to the Shore for lunch, packed a hamper and took it across to town and put it into the parcels office, while in Karangahape Rd I met John Greenwood and walked about with him until it was time to return to the Shore.  Mr Wallace, Alma and I went to the Pictures.

Wednesday 2nd   It was a fine day.  Bid good bye to the Wallaces who had been very kind to me and where I had spent a very happy time, went across to Auckland by the 9am boat.  Collected up my parcels and embarked on board the “Kawau” which left Auckland at 11 am, there were a lot of Omaha people returning home after the Show, although the steamer was rolling a bit I did not feel at all sick, went down to have dinner and was playing 500 in the afternoon. Willie did not meet me as he is working in the quarry for Dunning & Wyatt.  John Greenwood took me and my parcels up to our gate. I was glad to get home. Everything in the garden seemed to be very dry.

Thursday 3rd    It was a fine day. In the morning I was working in the flower garden, cutting off the spent rose blooms and tidying up.
In the afternoon I went to see Mr G Knaggs who is confined to his bed and in a very weak condition. In the evening I went down for the mail and attended the Library.

Friday 4th   It was a fine day. In the morning I went over to the farm orchard, cut some pea sticks to stick the last row of peas I planted.
Joe Wyatt was here to get my signature.  In the evening the Bachelors gave a grand plain & fancy dress ball in this Hall, all of us went and enjoyed ourselves very much, there were a lot of fancy dresses.  Musicians came from Auckland a pianist, a violinist and a cornet player, there was some good singing and abundance of refreshments. I was playing 500.

Sunday 6th   It was a fine day, Jane & the children went home in the morning in Charlie Dunnings cream cart.
Revd Macdonald conducted service in the Hall in the afternoon.
Mrs Handby was here for dinner and went with us to Church.

Monday 7th   It was a fine day. In the morning I got firewood.  In the afternoon Revd Macdonald & his Aunt Mrs Henry called, he had a look round the garden and he sought my advice about ordering some Roses. Afterwards I went down when the Steamer arrived and got the mail, after which I went up to Joe Wyatts and Alex Haskell and I witnessed his Will.

Tuesday 8th   There was a slight shower during the night and also this morning.
After breakfast I went down to the village to help Revd Macdonald measure off the Church site.  After I returned home I commenced picking Evans Early plums, Mrs Simpson and Grace were helping in the afternoon and after tea Willie came out and was helping, we picked 12 Cases.   I was very bad with a cold on my chest in the evening and went to bed early.  Willie put hot flannels on my chest which gave me great relief.

Wednesday 9th   It was a fine day. Willie got up very early and hauled the 12 Cases of Plums & two boxes of butter & eggs down to the wharf.   In the morning I got firewood, the remainder of the day I took it easy as I was not very well.

Thursday 10th   It was a fine day.  Polling Day throughout New Zealand for Members of the House of Representatives.  In the afternoon I went to see Mr G. Knaggs who is very ill, I made his will and Mrs Rogers & I were the Witnesses.  I had tea there, returned home and then went down to the Hall to record my vote,
I waited [sic: walked]  down to get the mail & attend the Library, staid down till 10.30 to hear the returns as they came in.  It came on a misty rain and dark.  I got wet coming home and had a difficulty in finding my way. 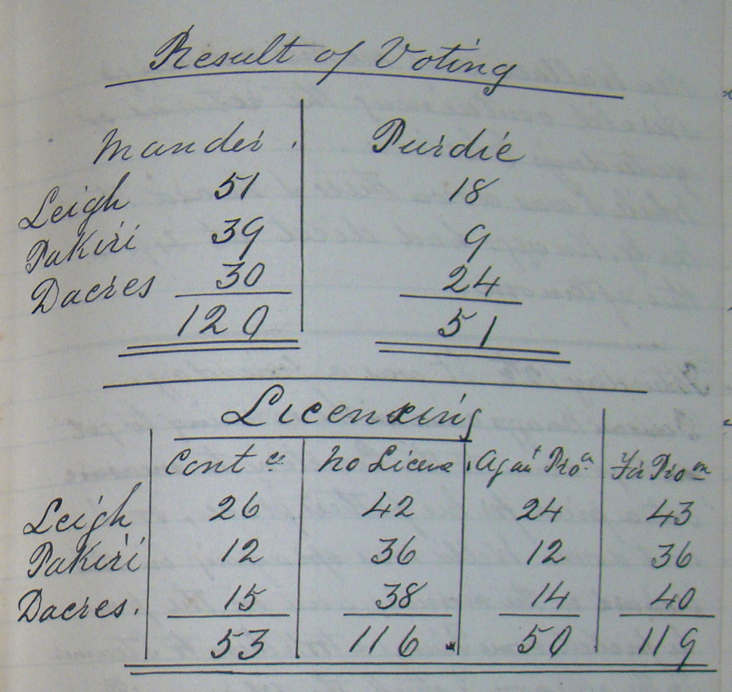 Friday 11th   It was a fine day.  There was a Christmas Tree in the Claim Hall this evening, but none of us went.
Went down to meet the Steamer in the evening to get the,
[sic: mail?]  she did not arrive here until 9 pm so as I had to wait Wil Dunning & I went into Archie Dunnings and played 500.  Ken Wallace sent me this morning’s Herald containing the returns of yesterday’s Election.
While I was down there I heard that Mr G. Knaggs had died at 4 pm this afternoon.

Saturday 12th   It was a fine day. Duncan Knaggs came in the morning to get me to go down to the Cemetery to measure out a piece for his father’s grave, so I went down. Willie was spraying in this orchard in the morning and in the pm he picked some Plums & took them to Steamer.  In the afternoon I stuck the 3rd row of Peas in the farm orchard.

Sunday 13th   It was a fine day. The late Mr George Knaggs was buried in this Cemetery at 2pm,  Revd Spiers (Methodist) conducted the service at the grave.  Afterwards he held the usual service in the Hall, there was a  large congregation & he gave us a splendid sermon, Mr Glass presided at the organ and afterwards played the Dead March in (Saul) for Mr Knaggs.

Monday 14th   There was a nice rain early this morning which freshened up everything although it did not go very deep into the ground. I planted out some Cornflowers and did other work in the flower garden.
Willie did not go to the quarry to day, but as the ground was moist he planted out Tomatoes, Lettuces, Cabbage & Chou Mollier.

Tuesday 15th   It was a fine day. In the morning I was working in the flower garden and in the afternoon I was helping Grace & Mrs Simpson pick plums.

Wednesday 16th   It was very dull when we got up but it did not rain last night as we thought it would. Willie went to work in the quarry, but it came on to rain steadily and he only worked till 10 am and then he came home wet.
As I could not do any work outside I wrote a lot of letters.
Willie hauled his fruit down to the wharf in the afternoon. I went down for the mail. Bertie Witten & his bride came from Auckland by the “Kawau” this afternoon, having only gone to town yesterday, they were married at Pakiri last Monday morning by Revd Spiers (Methodist) of Warkworth.

Thursday 17th   It was a fine day. In the morning I went over to the farm orchard and planted 1 long row and 2 short rows of Canadian Wonder beans, in the afternoon I fixed up a panel of fence near the front gate, made a sprinkler.  In the evening I went down for the mail & attended the Library. There was a meeting of the committee of the ratepayers Asson.

Friday 18th   It was a fine day. I got firewood, planted 4 Dahlias,
3 Cornflowers  &  3 Stocks.
Went down to the Steamer in the pm & got the mail.  In the evening we picked 4 Cases of Tibbitt’s plums.

Saturday 19th   It was a very hot day. Willie did not go to the quarry to day. We were all picking plums in the morning. We picked 14 Cases of Tibbitt’s & 3 Cases Wright’s Early and Willie hauled them down to the wharf, the Steamer left here at 11.15 am.  Willie was picking plums in the afternoon to send away next week.
I planted 2 Cornflowers & 3 Stocks near the arch.
Mrs Simpson walked over to Ti Point in the evening to stay all night.

Sunday 20th   It was a fine day. We drove over to the Claim in the morning. We picked up Mrs Simpson at Ti Point School who staid at Flos last night. I spent the day with Jim and Jane. The others spent the day at Bowden Birdsalls. We all drove home in the evening.

Monday 21st   It was very squally in the morning and scuds of rain. Willie was working at the quarry.  I was picking plums all day, the others helped.  There were 14 Cases of Tibbitts and 2 of Wrights Early.  Willie hauled the 16 Cases down to the wharf in the evening.
I went down to the village after tea to get the mail.

Tuesday 22nd   It was a fine day, but very windy.
I planted out 14 Dahlia plants.  Willie and the others picked 5 Cases of plums in the evening.

Wednesday 23rd   It was a fine day. In the morning I walked over to Ti Point.  Called at Joe’s to take the children a Xmas box.  Returned home in the Steamer.  Got the mail and came home.  In the afternoon I was working in the flower garden.

Thursday 24th   It was a fine day. In the morning I went down to the village to post some letters. We were preparing for Christmas.  In the evening I went for the mail and attended the Library.

Friday 25th   Hot day.  We passed a quiet day at home.  In the evening I conducted services in the Hall to celebrate Christ’s birthday and also the Marsden Centenary, there was a fair congregation.  Mrs Gravatt presided at the organ. Collection 6/2 for organ fund.

Saturday 26th   It was a fine day. In the morning I went down to the village to send some lemons by Charlie Dunning to Jane.  Heard that Mrs Lloyd had died suddenly last night.  Alf Gravatt came up here afterwards to ask me to read the service over Mrs Lloyd tomorrow at 2.30.  Harold & Flo drove over in the afternoon & staid tea, they gave me a lift when they were returning home, as far as the Ti Point road and then I walked on to Jims, staid the night.

Sunday 27th   It was a very hot day. Willie, Grace & Mrs Simpson drove over to the Claim, we all had dinner at Jims and in the afternoon Mrs Lloyd was buried in the Whangateau Cemetery, a large number attended, I read the service.  We returned to Jims, had tea and we drove home.

Monday 28th   It was a very hot day. Willie went back to work in the quarry. We were picking Plums all day. We picked 10 Cases Burbank, 1 Mixed Plums, 5 Tibbitts, 2  Early Orleans.

Tuesday 29th   It was a fine day. Willie hauled the 18 Cases Fruit down to the wharf before he went to work.  I went down to the village later on to get the the  [sic:  to meet the]  steamer which should have been here at 7.30 am did not get here before 9 owing to a dense fog at Mangawai.
In the afternoon I went to see the stone breakers at work, and afterwards to Willie Dunnings.

Wednesday 30th   It was a very fine day. I wrote a letter to my brother Henry and it was posted in the afternoon. I took some Roses down to the Captain and some Dahlia roots to the  Engineers of the “Kawau”.
The “Kawau” made a round trip, but came in here first to land passengers.  Willie Pratt, Horace and his wife came up by her, also George Davey who came up here to stay.

Thursday 31st   It was a very fine day. George Davey & I walked over to Ti Point in the morning, he went to Harolds for lunch, I went down to Joe’s to enquire after him, as he has had enfluenza pretty bad,  but was glad to find he was much better.  George stayed at Harolds all night, but I walked back, got the mail and attended the Library.