Monday 1st   We finished packing the Wool and the boys hauled it down to the Wharf in the morning.  The 2 Bales of Wool contained 103 fleeces, but one of these was left from last year, so that there were only 102 fleeces of this years however we have 103 Sheep including the one that is up at Mr Neeleys.  In the afternoon we planted a double row of White Runner Beans the top side of the house.  It came on to rain in the evening and the wind is blowing strong from the NE.

Tuesday 2nd   The boys were cutting bush in the morning.  I was cutting Scotch thistles both morning and pm.  Henry was hauling firewood for the new Storekeeper in the afternoon.  The following is the weight of the fleeces of Wool sheared this season. 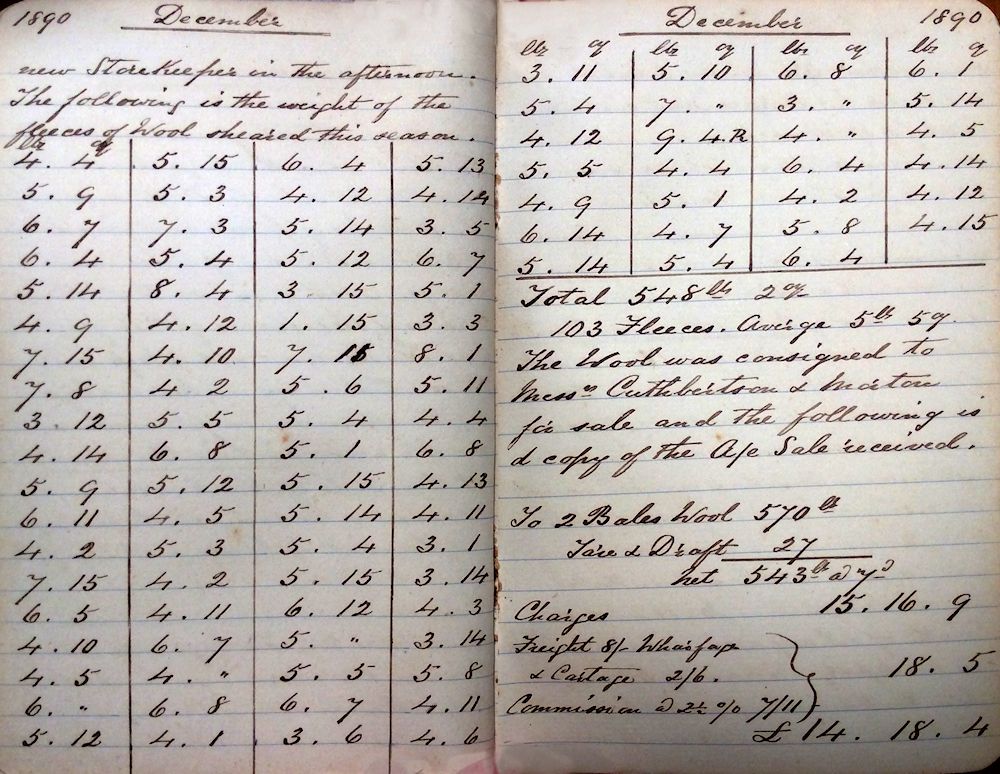 Wednesday 3rd   Henry hauled firewood for Mr Harper and also a load for A. Haskell.  John was cutting bush & I was cutting Scotch Thistles on the farm.

Thursday 4th   We were digging the upper side of the house, planted a double row of White Runner Beans also manured 3 more trenches to plant with the same kind of beans some other kind.
Mr W. Meiklejohn and Mr Carrie came here in the afternoon,  they had a look round the orchard and they staid for tea.  Got the Sheep up and killed a fat ewe that came from the Pa.  It weighed 75½ lbs.  Mr Alphonso Smith of Whangarei, who is going to be deputy Returning Officer called here in the evening for the Key of the Hall,  he gave me lots of Whangarei news and he staid for supper.  Miss Selwood was also here.

Friday 5th   Finished digging the upper side of the house.  I stuck the Duke of Albany Peas.
The boys had a holiday in the afternoon.  I went down to the Hall to the General Assembly Election  and voted for Elliott.  The result here was Elliott 31.    Thompson 8.   There was a meeting of the Show Committee at 7 pm in the Hall.

Saturday 6th   Earthed up the Potatoes again, below the house, and planted Maize between the rows.  I went on John’s horse up the hill called to see Mrs Greenwood Snr, called at Wright’s & Gravatt’s and then went up to Pratt’s where I stayed all night.

Sunday 7th   Tom & Wm  Pratt & I went to Dacre’s Claim Church in the morning, we then came home here for dinner,  I read service in the afternoon, there were about 35 present.

Monday 8th   It was a very hot day.  Henry went on John‘s horse to Warkworth to pay my Property Tax.  John & I dug the lower side of the house.

Tuesday 9th   It was a very hot day.  We finished digging the piece of ground the lower side of the house.

Wednesday 10th   A very hot day.  We picked 2 Cases of Lemons  one containing 16½ Doz and the other 17 Doz – 6½ Doz of these belonged to Henry.  In the afternoon we beat down and planted Maize in drills 3 ft apart, the ground that we have just finished digging below the house.
The Steamer came in early, I went down to the Wharf.

Thursday 11th   Henry hauled some goods for Mr Harper.  John & I finished planting Maize below the house, we then commenced digging above the Beurrce Pear Tree.  We got the sheep up in the evening.

Friday 12th  A very hot day.  We continued digging same place as yesterday.  We killed a Sheep in the evening.  I also went to the Library.

Saturday 13th   A very hot day.  We finished digging the piece of ground  above the Beurrce Diel Pear Tree in the morning.  There was a meeting in the Hall in the eveningof the Sub Committee to revise the Schedule for the Show.

Sunday 14th   It was a very hot day.  I rode over to Dacre’s Claim Church in the morning.  Tom Pratt & Alec Meiklejohn returned with me for dinner.  I read service in the afternoon, there was a pretty fair congregation,  W. & G. Pratt were here for tea.

Monday 15th   A very hot day.  The boys were hoeing the Maize.  I dug up the bed intended for Parsnips.  Also dug out Sorrell.

Tuesday 16th  There were some heavy showers of rain in the morning.  The boys cut bush in the afternoon.  I dug out sorrell between the Negro Beans.

Wednesday 17th   It was showery in the morning.  We beat down the ground and planted Maize in the piece of ground above the Beurrce Diel Pear Tree, the rows 3 ft apart.  This is the last Maize we intend to plant.  I went down to the Wharf in the evening, but the Steamer did not come in as the wind is blowing strong from the NE. There were several passengers waiting to go away.

Thursday 18th   It rained heavily all last night and was very showery all day.  I was writing for the Show.  We got the Sheep up in the evening.

Friday 19th   It was a fine day.  The boys cut bush in the morning.  I beat down the ground in front of the house in the morning, and in the afternoon we sowed 2 double rows of White Runner Beans, also commenced to plant a few rows Negro Beans against the Golden Russett Apple Trees.  We killed a Sheep in the evening .  I went to the Library.

Saturday 20th   It was a fine day.  We sowed some rows of Negro Beans (3),  Red Beet (2),  White Stone Turnips.
I cleaned the Lamps and swept out the Hall in the morning.  I rode over to Mr Birdsalls in the afternoon on Henry’s horse.  Revd J. Haseldon arrived from Auckland at 4.30.
The “Rose Casey” came in late this evening from Auckland.

Sunday 21st  Mr Walter called for me and we both rode over to Dacre’s Claim Church for the morning service.  Revd J. Haseldon officiated, there was a large congregation and 8 staid for the Communion .  Collection 15/6.  I returned home for dinner.
Mr Haseldon & George Pratt were here for tea.  Mr Haseldon conducted service in the Hall in the evening there were over 60 present.  Collection 12/-  Mr Haseldon went up to Mr Greenwood’s after service.

Monday 22nd   It was a fine day.  John & I mended up the fence at Mathesons, he then cut bush, also in the afternoon.  Henry hauled some goods for Mr Harper.
Sowed 4 rows White Stone Turnips and 3 rows of Mangel Wurzel.

Tuesday 23rd   The boys were cutting bush.  I was digging out sorrell between the Pumpkins & hoeing Maize.  I went to Mrs Fordhams in the evening.

Wednesday 24th   The boys were cutting bush.  I was digging the piece of ground intended for Parsnips, but I have changed my mind & now intend planting it with, so dug up the path and joined it with the other ground planted with Maize, dug fowl manure in.
I went down to the Steamer in the evening.

Thursday 25th   Christmas Day.  A very fine day.  We all spent the day at home and had a good Christmas Dinner.  Willie Pratt came in the afternoon.  Mr & Mrs Walter & the boys came for tea and spent the evening.

Friday 26th   Maud & Willie went to Matakana to a cricket match & to an entertainment in the evening .  I & the remander of the family got the loan of John Wyatts boat and went to the Maori Point fishing.  Tom & George Pratt went with us, we only caught 12 fish altogether.  The Pratts came up to our place for tea.

Saturday 27th   The boys were cutting tea tree up the big clearing and they finished cutting the bush up the slip.  There was a meeting of the Show Committee in the evening.

Sunday 28th     There were a few slight showers during the day.  Revd S. Griffith preached in the morning, I went and liked his sermon very much it is the first time he has held service here.  Willie Pratt went home in the pm.  Mr & Mrs Handby, Sid & Clara Fordham came for tea and we all went down for service at the Hall, which is now changed to the evening.

Monday 29th   The boys were cutting ti tree up in the clearing.  The girls & I were hoeing Maize.  Maud & Henry went to a dance at Dacre’s Claim in the evening.

Tuesday 30th   The boys were hoeing Maize.  I was doing odd jobs.  We got the Sheep up and killed one in evening.

Wednesday 31st   It rained nearly all day.  I went down to the Village in the evening to meet the Steamer, but she did not come in.   We afterwards heard that the “Rose Casey” had broken down and they are going to send a Steamer tomorrow night.