Monday 1st   It was a dull day, but it did not rain.  Willie & John went to Tomarata.  Henry went Pheasant shooting as the shooting season commences today.
I was sowing grass seed in the E.R. all day.
Revd J. Haselden returned here in the evening from Big Omaha where he had married Mr James Darroch to Miss Maria Birdsall.
Mr Haselden gave a reading of Dickens’ Christmas Carol illustrated with magic lantern views,  he also showed us the pictures illustrating Enoch Arden and the Life of Christ.  There were 66 present and
£1 . 13 . 0 received for admission.   2/6 out of the receipts had to be deducted for the rent of the Hall.  Mr Haselden returned with us to stay the night.

Tuesday 2nd   A wet day with strong wind from the SE.  On account of the weather Mr Haselden could not proceed on his journey.  We were all confined to the house except Henry who went shooting.

Wednesday 3rd   It blew and rained very heavy all day.  Mr Haselden could not proceed on his journey, we were all confined to the house, except Henry who went shooting.  The Steamer should have come to day but on account of the gale of wind she did not come.

Thursday 4th   Mr Haselden left this morning.  It did not rain during the day, but it came on to rain in the evening.  I went down to the village in the morning to take Mr Haselden‘s boxes down to the wharf also to bring some wheat up with me.  Henry & I sowed grass seed in the E.R. in the afternoon

Friday 5th   There were a few showers and it was very dull.  Henry was sowing grass seed in the E.R.   I was getting fire wood .  We killed a sheep in the evening.

Saturday 6th   It rained heavy last night and the ground is in a terrible state.  We finished sowing grass seed in the School Reserve. We went down in the afternoon to measure the line between Mr Savages and the E.R. which was 14 chain 25 links so that our share of fencing will be 7 chains  12½ links and the top line bounding the road 2 chains 88 links.  Willie and John returned from Tomarata in the evening bringing 2 pigeons with them.

Sunday 7th   It was a fine day..I read service in the Hall in the afternoon, there was a good congregation.

Monday 8th   Willie & John left for Tomarata early in the morning.  Henry went Pheasant shooting.  I was clearing & burning the line in the E.R.

Tuesday 9th    Henry went Pheasant shooting.  I bored the straining post also cleared the line in the E.R.  The Steamer came in early.  I went down to the village to take the eggs.  There was a dance in the Hall in the evening.

Wednesday 10th   The Steamer took 17 passengers away this morning.  Henry hauled timber from the wharf for Mr Harper to build a stable, he also hauled up for us a sack of Wheat and 1 Coil of Fencing Wire.  I was working in the E.R. clearing the line and burning the Rata.

Thursday 11th   Henry & I were digging Kumeras in the orchard all day, they turned out very well, we got about 4 Cwt, we have raked out a good many and the Pheasants and Fowls have  helped themselves to a great many.  I went down to Charlie’s in the evening.

Friday 12th   It threatened for rain very much in the morning, but it cleared up and blew very strong from the E.  We were hauling Posts for our fence at the E.R.

Saturday 13th   Henry & I went down to the E.R. to sight out the line and commence fencing, but it came on to rain and we had to leave off.  Henry went shooting, I got a lot of firewood.  Willie & John returned from Tomarata early in the pm.

Sunday 14th   It was a fine day.  I taught in the Sunday School instead of Miss Wann .  Read service in the Hall in the afternoon, there was a very fair congregation.

Monday 15th   It was a fine day.  Willie & john returned to Tomarata in the morning.  Henry was Pheasant shooting.  I commenced to erect the fence in the E.R. between Mr Savage and us.  I put in 8 posts.  I wrote to Mr Haselden in the evening saying I should be unable to attend the Lay Reader’s Conference on the 24th inst  also informed him that I had conducted 34 services in 1862.   I filled in my Sheep return made up to April 30th  1893 as follows 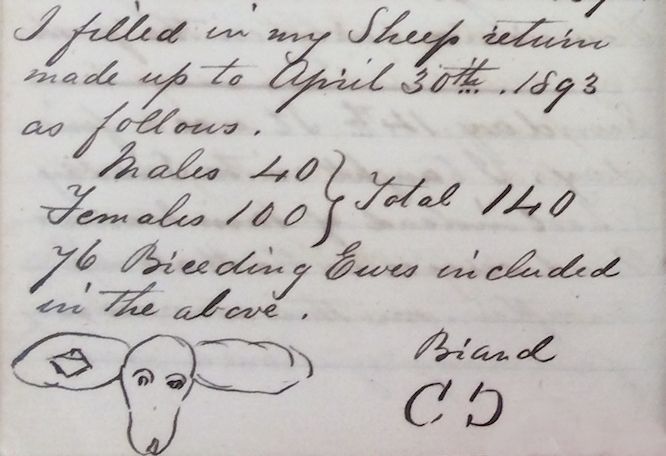 Tuesday 16th   It was a dull day although it did not rain.  Henry went Pheasant shooting.  I was fencing in the E.R.  I put in 5 posts.
George Pratt came in the evening and brought us a piece of beef.  Willie returned from Tomarata in the evening as he expects some grass seed up by the Steamer which he is going to pack up to his place tomorrow.

Wednesday 17th   It rained all day.  Willie did not go up to his place.
We did no work out of doors.

Thursday 18th   It was a very fine day.  Willie went away in the morning to pack grass seed up to his place.  Henry & I were fencing in the E.R.  We put in 13 posts.

Sunday 21st   It was a fine day.  I taught Sunday School as Miss Wann had gone home to Matakana.  I read service afterwards, there were about 35 present.

Monday 22nd   Henry went shooting.  I continued fencing.  It was a fine day.

Tuesday 23rd   Henry went shooting.  I went to the E.R. was clearing the top line.  While moving a log I strained my back and had to come home.  The Steamer came in early and went out again as she is going to make an excursion trip tomorrow as it is the Queens birthday.

Wednesday 24th   I was in bed most of the day with a bad back.  Henry hauled up 1 Sack Potatoes, 1 ditto Sharps  & 1 Bag of Sugar from the Wharf, in the afternoon he went fencing up in the E.R.

Thursday 25th   Henry was working at the fence.

Friday 26th    Henry was working at the fence.

Saturday 27th   Henry went on his horse to Pakiri, shooting, he intends to stay until next Tuesday.  It was a fine day.
There was a meeting of the Farmers Association in the evening.
Mr T. Handby read a very interesting paper  on Lemon culture.  Mr Witten also gave a great deal of valuable information on the subject. There were 20 members present.  We had a very nice meeting.

Sunday 28th   It was a fine day, winds at the S, the roads are drying up.  There was a small party of us at home today as Henry is away and John did not come home this week.  Revd J. Law (Weslyan) preached for the first time in the Hall in the afternoon.

Monday 29th   It was a fine day, wind at the S.  Willie returned to Tomarata in the morning.
I am still unfit for work on account of my back.   I did a good deal of reading & writing.
Mr & Mrs Handby came for tea and spent the evening.

Tuesday 30th   It threatened for rain but we did not get any.  There were light showers at Pakiri.  Henry returned from Tomarata in the evening bringing several Pheasants and Pigeons which he sold to the Steward of the Steamer.  Willie P. came home in the evening.  Mr & Mrs Samuel Denby came up here for tea and all the young people went to a Dance in the Hall.