Monday 1st   It rained heavy in the morning, but cleared up afterwards and it was fine with the exception of a few showers.
I was mending the fence round the farm orchard .
Revd E. M. Cowie called here in the morning and staid for dinner, he went visiting in the afternoon and came back here to sleep.

Tuesday 2nd   It was a fine day.  Revd E. M. Cowie left here early in the morning to give Mrs Copeland the Communion, he made several other calls and then returned here for dinner, he went down to the Steamer to get his letters and then he went on to Pakiri on his way north.  I took the Bullocks down to the Wharf and hauled up a chair & parcel of drapery from D. S. C., also 2 bags of B & B manure & ¼ Bushel Wheat from the Store.  I finished mending the fence round the farm orchard.

Wednesday 3rd   It looked very dull and misty and there were several showers, especially a heavy one in the afternoon.
I commenced digging in the farm orchard, I commenced at the far Orleans Plum tree.
We put the cows out in the front as there is so much feed out there.  Ernest Wyatt came in the evening and staid all night as he is going to start working here tomorrow.

Thursday 4th   It was a misty and showery day, but it cleared up in the evening.   Ernest Wyatt commenced working here today. We dug in the farm orchard, there was so much rain last night that the water was laying on the ground, so we could not continue digging where I left off yesterday, but began at the far apple tree working this way,  I put Bonedust & Blood round the trees.
The young people went down to the Hall in the evening to deckorate for the Cricket concert tomorrow night.

Friday 5th   It was a fine day.  The wind is blowing strong from the SW and the ground and the roads are drying up splendidly.  We continued digging in the farm orchard.
There was a concert & variety entertainment in the Hall in the evening in aid of the cricket club.  I was chairman and it was a great success, they took over £10.

Saturday 6th   It was a moderately fine day, there were only a few showers, wind still blowing strong from the SW.
Ernest Wyatt did not work here today.  I was digging in the farm orchard.

Sunday 7th   It was a fine day.  Willie rode up to Maud’s in the morning, returning in the afternoon.  I read service in the Hall in the afternoon there was a fair congregation.
Jane went to Joe Wyatt’s for tea and Mabel & Ernest returned with Jane in the evening.

Monday 8th   It was a fine day.  Ernest came in the morning to work.  We finished digging the farm orchard.  I went to Charlie Wyatts in the evening.  Minnie came and staid all night as Miss Niccol went to Matakana to spend the holiday tomorrow.

Tuesday 9th   It was a fine day.  We were working in the garden, Hoeing Potatoes, sticking 1 row of peas – breaking down ground and digging in manure for small seeds.  Jane & Ernest went for a ride in the evening and I went down to the store to get some Maize.

Wednesday 10th   It was a very blowy day and several showers.
We dug manure into the piece of ground next to the peas, and sowed 1 row of Red Beet,  4 rows of Onions & 2 rows of Early Horn Carrot, we also commenced to dig the piece of ground that was in Kumeras last year.
Sydney Fordham came up and spent the evening with us.

Thursday 11th   It was a fine day, but the wind was blowing very strong.  We sowed 2 rows of White Stone Turnips, also planted 15 Tomato plants.  We then continued digging the ground that was in Kumeras last year.
The Steamer came in the evening.

Friday 12th   It was a fine day, but the wind was blowing strong.  The Steamer left at 6 oclock this morning making a cheap excursion to the Auckland Show, about 17 went up in her.
We finished digging the piece of ground that was in Kumeras last year, we then commenced digging the top side of the house.
Killed a Sheep in the evening.

Saturday 13th   It was a fine day.  Wind still blowing strong.  Continued digging  top side of the house.  Jane and Ernest went over to the cricket at Dacres Claim in the afternoon .
I was digging in the flower garden.

Sunday 14th   It was a fine day.   Wind still blowing strong.  Ernest & Jane rode up to Maud’s and spent the day there.  I read service in the Hall in the afternoon.

Tuesday 16th   It was a fine day.   We continued digging under the dining room window.
The Steamer came in at 1 pm, several excursionists returned from the Auckland Show.  Maggie Wyatt, Lennie, & Maud were here for dinner, we all went down to the Steamer.
I had 2 Woolpacks up by her.  We put a Bull inside our place that was out on the road, in the evening.

Wednesday 17th   It was a beautiful day, quite a summers day, warm and calm, it seems that the wind has blown itself out at last.  We finished digging the piece of ground below the house, we then cleared out the shed ready for shearing.  In the afternoon we sowed 2 rows of Strategem Peas and 2 rows of Dun Beans, next to the Braod Beans.
In the evening I went down to Charlies to get a Weather in return for one that he borrowed from me last summer.

Thursday 18th   It was a very fine day, but more wind than yesterday.  Charlie & Walter Wyatt came to shear the Sheep, we got them all up from the farm and they sheared under the pine trees, Ernest was also helping.  They finished shearing all the Sheep  that we had in ,  viz  78. 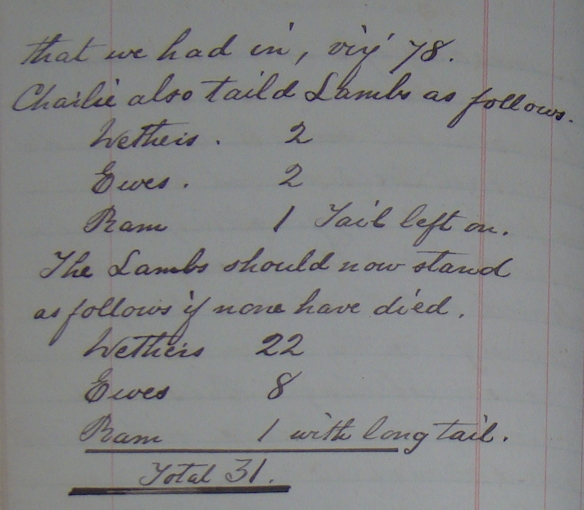 Friday 19th   There was a little rain last night, but it turned out a fine day, tho’  rather windy.   Ernest & I sheared 2 skins, sheared a Lamb & packed the Wool,  1 Bale,  1 Dump and hauled it down to the Wharf and hauled up a Sack of Maize that I got at harpers.
Hettie Wyatt was here for tea. 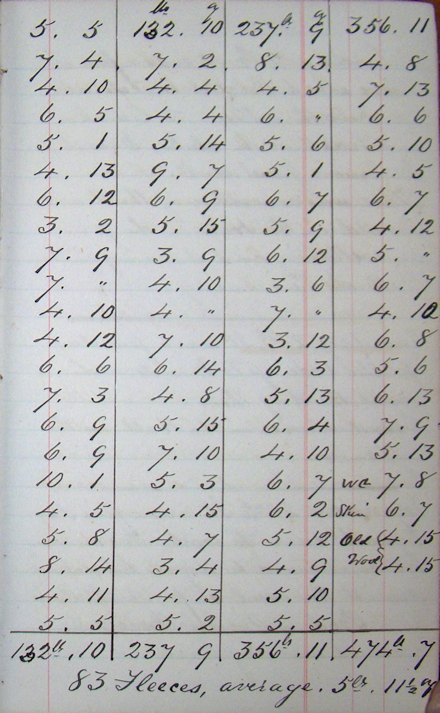 Sunday 21st   It was a fine day.   Willie rode up to Mauds and spent the day there.  I read service in the Hall in the afternoon.

Monday 22nd   It was a fine day.  Ernest came to work this morning.  We commenced to dig in this orchard against the land slip, at the Coe’s Late Red & Buerre Bosc, the ground was very hard.
There was a misty rain in the evening.

Tuesday 23rd   It was a fine day.  We continued digging in the orchard.  Maud came for dinner and stopped here until the evening when we all went down to the Steamer, she did not come in until 7 pm, she was loaded up with wool and had to leave 21 bales behind.

Wednesday 24th   It was a very hot day.  I went down to the wharf in the morning.  The “Kawau” called in to take Hettie Wyatt back to the Kawau.  Some of the settlers sent a wire to  Captn  McGregor asking him to send the Steamer again to take the wool she left.  Jane went out fishing with Walter & Honor Wyatt, they caught a good many fish.
Ernest and I were digging in the orchard.
The Dunning’s boys, Walter & Albert Wyatt, Minnie & Miss Niccol came to spend the evening.

Thursday 25th   It was a hot day.  We got all the Sheep up from the farm, we shut one up to kill, put 19 principally wethers into the Barley Paddock and put the remainder out into the front.
In the afternoon we mended & tightened up wires and made the fences sheep proof in the barley paddock and the fence in front bounding the road.
Jim Dunning came in the evening to trim Empresses mane and tail and he staid and had a game of cards.

Friday 26th   It was a very hot day.  The “Rose Casey” came in at 7 am this morning to take the remainder of the wool.
Ernest and I were digging in the orchard.  We killed a Sheep in the evening.

Saturday 27th   It was a hot day.   Took the mutton down to Harpers in the morning.  Ernest & I were digging.  Ernest went to the Cricket practice at Dacre’s Claim in the afternoon .  I was working in the flower garden and sowed some flower seeds.

Sunday 28th   It was a fine day, but not quite so hot as yesterday.  I read service in the Hall in the pm.   Willie went to Uncle John’s for tea.  Jane rode up to Mauds after tea.

Monday 29th   Ernest was working here digging, he finished digging near Henry’s garden and then dug rings round some of the plum trees in the other part of the orchard.  Charlie & I rode to Tea Point and other parts of Dacres Claim laying out work for the Road Board. There was a heavy shower of rain about 11.30, we called up at Mr Hadwicks and had dinner there, he and the Ashtons were shearing sheep, but they had to let them out on account of the rain.

Tuesday 30th   It was a fine day, it threatened to rain, but we did not get any.  Ernest and I were digging rings round the fruit trees in the orchard.  The Steamer came in about 1.30.  I had a letter from Henry, he says he is going to leave shortly for NZ to shear down South and he might come home for a few days.