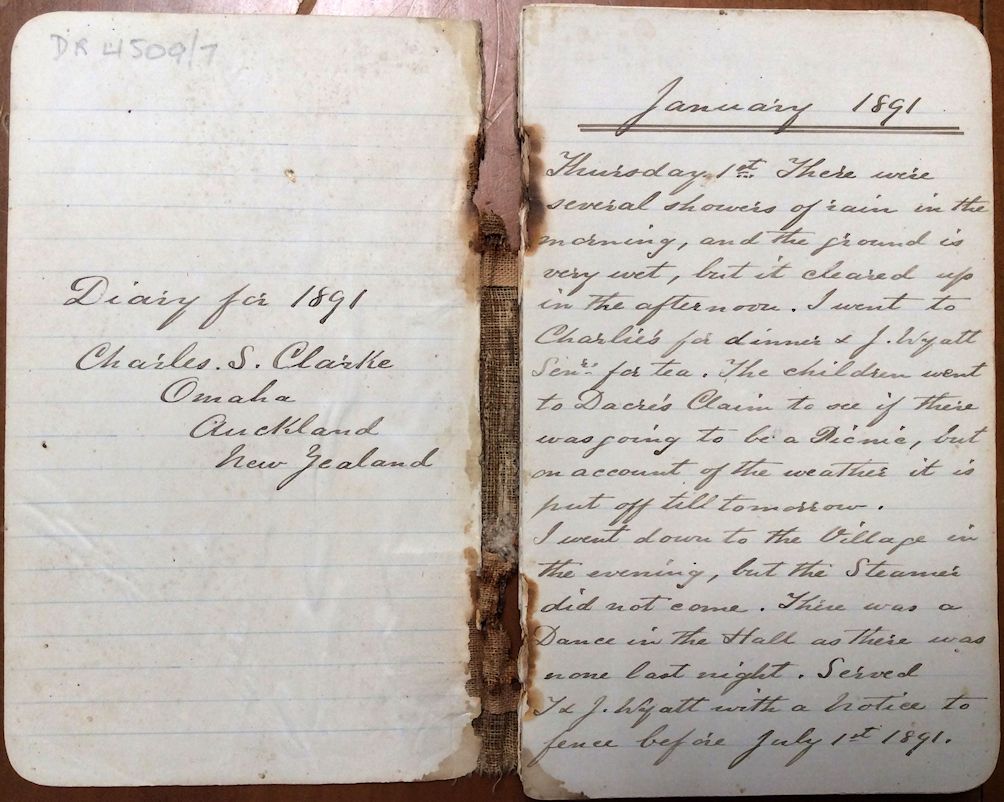 Thursday 1st   There were several showers of rain in the morning, and the ground is very wet, but it cleared up in the afternoon.  I went to Charlies for dinner & J. Wyatt Senr for tea.  The children went to Dacre’s Claim to see if there was going to be a Picnic, but on account of the weather it is put off till tomorrow.
I went down to the Village in the evening, but the Steamer did not come.  There was a dance in the Hall as there was none last night. Served  T. & J. Wyatt with a Notice to fence before July 1st 1891.

Friday 2nd   It was finer than yesterday, but it was blowing very strong from SW.  The children went to the Picnic at Dacre’s Claim.  I went with Mr Walter to the Goat Island in the afternoon and then returned there for tea & came home to milk.  Went to the Library in the evening.

Saturday 3rd   It was blowing very strong from the SW.  The boys were hoeing Maize in the morning.  I was sticking the White Runner beans.  I was working in the flower garden in the afternoon.  It rained very heavy in the evening.  The Steamer came in the evening bringing a lot of passengers.

Sunday 4th   It was a fine day.  I rode to service to Dacres Claim in the morning.  Charlie & Maggie came her for tea.  I read service in the evening.

Monday 5th   I was working amongst the Maize in the orchard, I sprinkled fowl manure round it, and then earthed it up.  I went to Mrs D. Mathesons in the evening.

Tuesday 6th   The boys were cutting ti tree up in the clearing.  I was working in the garden.  Henry went to Pakiri in the pm.

Wednesday 7th   The boys were cutting ti tree in the morning.  I went down to the Wharf in the evening, the Steamer came early and went away as soon as she had discharged and taken in cargo.  Several persons went up in her, who have been summoned as witnesses against James Greenwood.

Thursday 8th   Henry was hauling for the Store & A. Haskell.  John was cutting ti tree in the morning  and they were digging up sorrell in the orchard in the afternoon.  I was getting bean sticks & was sticking them.  I went to Mrs Fordhams in the evening to see Mr Anderson who is staying there.

Friday 9th  The boys were cutting ti tree.   I was getting bean sticks and finished sticking them.  Mrs Dunning, Mr H. Meiklejohn & Mr Anderson came in the afternoon & staid for tea.  We killed a Sheep in the evening.

Saturday 10th   We killed another Sheep this morning, as we had so many orders for mutton.  Henry went out in a boat fishing, but did not catch many.

Sunday 11th    I went  John‘s horse up the hill in the morning.  I called in at Greenwoods to see John who has got a bad Knee.  I then went on to Pratts, staid for dinner and returned home in the pm.  Tom Pratt, Jim Young, John Dunning & C. Ashton were here for tea.
I read service in the Hall in the evening, there was a good congregation.

Monday 12th   John went to the Big Omaha gum flat  to dig gum, he went in Duncan Knaggs‘  boat & is going to share a tent with Dan McKenzie.  We commenced to cut Cocksfoot seed at John Wyatt Snr’s in the pm, but we had to leave it as it is not ripe enough.

Wednesday 14th   I was mending the fence in the pigs paddock.  We were cutting Cocksfoot seed.  Went down to the Steamer in the evening. Several passengers came up & John Greenwood went to Auckland to the Hospital.  Mr Pratt got 2 suits of clothes for the boys & 1   7ft x cut saw.

Thursday 15th   Henry was hauling for Mr Harper, but it came on to rain and he had to knock off.

Friday 16th   Henry finished hauling for Harper in the morning.  Henry & Maud went to Pakiri to the races & and staid for the dance which was held at Mr Gravatts.

Monday 19th   The boys were cutting grass seed.  I helped Mr Haselden get the Hall ready for the Lecture this evening.  The Bishop arrived and staid at Harpers.  Mr Haselden gave his Lecture in the evening, subject Enoch Arden, illustrated with coloured views.  There was a very good audience and £1 . 16 . 0   was taken at the door.  Mr J. Meiklejohn came here and staid all night.  Mr & Miss Came also came & staid for tea.

Tuesday 20th   The boys were cutting grass seed.  I helped Mr H. prepare the Hall for the confirmation.  The Bishop came here for tea, and in the evening held a confirmation in Hall.  There was a very large congregation.  There were 11 candidates including Maud & John and Henry – Collection £ 1

Wednesday 21st   John returned to the gum flat early this morning.  The Bishop & Mr Haselden left for Warkworth where there is to be a confirmation this evening.  We were cutting grass seed.

Thursday 22nd   We were cutting grass seed all day down at J. Wyatt Senr, we had dinner there.

Saturday 24th   We cut grass seed in the morning.  John came home from the gum flat in the evening.

Sunday 25th   Spent a quiet Sunday at home.  Read service in the Hall in the evening, about 50 present.

Monday 26th   John returned to the gum flat in the morning.  We were cutting grass seed.  Made 2 Lemon Cases.  It came on to rain in the evening.

Wednesday 28th   We cut grass seed in the farm orchard.  Henry took our 3 Cases of Fruit down to the Wharf.  Also one for Mr J. Wyatt Senr,  4 for Charlie Wyatt  & 10 for T. Wyatt.  Miss Pratt came and staid all night.

Thursday 29th   Henry was hauling for Harper & Haskell.  I was weeding and loosening between the Maize, Onions & Strawberries.

Friday 30th   I was digging out Potatoes between the Pumpkins.  Henry cut down a Kaihakatea tree to make a yoke out of.  Killed a Sheep in the evening.

Saturday 31st     I was digging out Potatoes between the Pumpkins.  Henry was thrashing out grass seed.  John returned from the gum field in the afternoon.